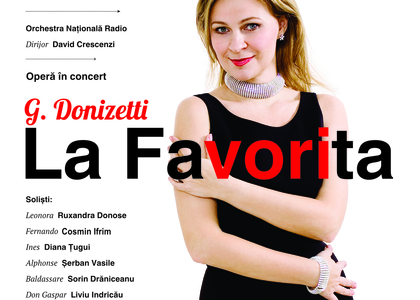 Monday, 25 January 2016 , ora 9.31
Carrying forward the tradition established at the Radio Hall in the last seasons, the one of presenting each January end an opera title of exceptional distribution in a concert formula, the Radio National Orchestra presents La Favorita, a creation of the Italian composer Gaetano Donizetti, on Friday, 29th of January (19.00). Under the baton of the italian originating conductor David Crescenzi, an entire constellation of lyrical artists are invited on the boards of the Radio Hall, having the mezzo-soprano Ruxandra Donose (in Leonor's role) as leader. Being a well known presence of the greatest boards of the world, the artist enjoys a particular career, her journey gathering concerts and opera performances on very important boards : The Los Angeles Opera,

La favorita, a part signed by Donizetti, is based on a love story of an amorous triangle that included the king of Castile, his mistress and her lover. The action is set in Castile, in the XIVth century, having as background the Moorish invasion of Spain and the fights between the State and the Christian Church.

Conductor David Crescenzi was named artistic director and conductor of Cairo Opera in September 2014. In July 2015, David Crescenzi conducted La Bohème by Puccini at the Sommer Festival of Sferisterio Arena, from Macerata. In January 2012, he toured throughout Germany and France along with Bergische Symphoniker and also collaborated, in the same year, with the Opera of Rio de Janeiro. He was also conductor of Solothurn Festivalului- Switzerland.

Tenor Cosmin Ifrim was a member of the State Opera of Vien from 2000 until 2008 and played roles as: Lord Cecil from Roberto Devereux, Rinuccio from Gianni Schicchi, Beppe from I Pagliacci, Fenton from Falstaff. In 2008/2009 session, he sucessfully played Alfredo from La Traviata in Londra, Maribor and Athens. A high point of his career was the performance of the tenor part in the renowned Stabat mater work by Rossini, along with The Israel Philharmonic Orchestra.

From the latest successful concerts, we mention a performance at the Metropolitan Opera from New York, conducted by the famous

James Levine, where the artist played the role of Ford, from the Falstaff opera, by G. Verdi.

You can listen to the live concert on all of the Radio Romania Culture and Radio Romania Music frequencies from the country and also in live streaming on the Internet, at www.radioromaniacultural.ro and www.romania-muzical.ro.

Tickets are available on www.eventim.ro,

In the Germanos, Orange, Vodafone, Domo and Carrefour shops, in Cărtureşti and Humanitas bookshops, in OMV gas stations and at the Radio Hall box office.