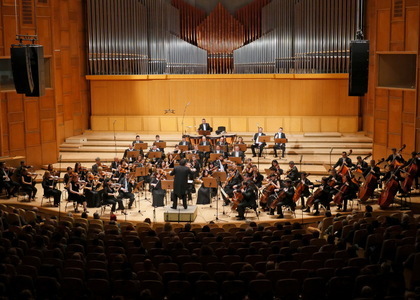 'The sorcerer's apprentice', the score from Walt Disney's famous 'Fantasia' at the Radio Hall

Monday, 8 February 2016 , ora 9.19
The National Radio Orchestra, under the baton of the Slovak conductor Peter Feranec, the first foreign main conductor in the history of Bolshoi Theatre in Moscow, proposes on Friday, the 5th of February at 7.00 at the Radio Hall, an evening dedicated to "stories" through two symphonic poems inspired by legends.

You will encounter the myth of the famous heartbreaker Don Juan (whose iconic figure was born during the Spanish Renaissance) and around whom Richard Strauss created the poem with the same title, and also "The sorcerer's apprentice", a piece composed by the French composer Paul Dukas and based on Goethe's poem with the same title. This second score is famous because it was included in Walt Disney's animated movie - Fantasia - in 1940, and was interpreted under the baton of the famous conductor Leopold Stokowski in his arrangement for the movie. Inspired by Goethe's poem, the romantic score which pertains to the program music genre (following a narrative) describes the adventures of a young apprentice who is trying to use his magical powers in the absence of his master, a sorcerer, powers that overwhelm him and get out of hand.

The evening will open with The Tragic Overture, Brahms' creation. During this event, you will have the chance to admire the violinist Cristina Anghelescu, the soloist of the Radio Chamber Orchestras and Choirs who will perform solo one of the most appreciated scores for violin of the symphonic repertoire: Violin and Orchestra Concert no. 1 G minor, written by the German composer Max Bruch. He wrote three concerts for violin: the first had its premiere in 1866, with Bruch himself conducting and it became a landmark of the repertoire for this instrument.

CRISTINA ANGHELESCUgraduated from National University of Music Bucharest, where she studied with the maestro Stefan Gheorghiu, and is a soloist for the Romanian Radio Orchestras and Choirs. During her time as a student, she was actively present on the Romanian music platforms and she was invited to perform in prestigious concert venues like Das Schauspielhaus Berlin, Tchaikovsky Hall Moscow; Teatro Monumental and Auditorium Madrid; Smetana Hall Prague; St. John's Smith Square, London, the Finlandia Hall Helsinki. She went on numerous tours in Europe, Taiwan, South and North America, South Africa etc.

Cristina Anghelescu has released a number of recordings, many of which are on CD and they include famous scores by Mozart, Tchaikovsky, Mendelssohn - Bartholdy , Vivaldi's "The Seasons", and the two violin concertos by George Lloyd with the renowned Philharmonia Orchestra of London.

The concert can be listened live on all frequencies of Radio Romania Culture and Radio Romania Music and in streaming live on the Internet on www.radiorormaniacultural.ro and www.romania-muzical.ro.

Tickets are available online on www.eventim.ro, or you may purchase them in the shops Germanos, Orange, Vodafone, Domo, Carrefour, Carturesti and Humanitas bookshops, OMV gas station and at the Romanian Radio Hall Box Office. For further information related to Romanian Radio Orchestras and Choirs, please refer to the site www.orchestreradio.ro or www.orchestreradio.com.