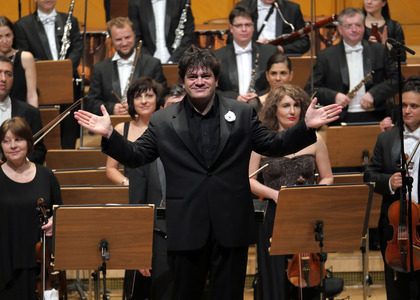 The concert from the Radio Hall represents a special occasion for the audience from Romania, who will listen on first European audition City Scene, work signed by the Canadian- American contemporary composer Karim Al-Zand. The score that reunites three short dances reflects the fascination of the agitated atmosphere of a city. The Karim Al-Zand`s creations consists in a great number of genres, starting with solo instrumentalist scores, vocals, of chamber of orchestral and for a vast audience. It has a great success especially in U.S.A. AND Canada, where it obtained a few national awards, such as Sackler Composition Prize, ArtSong Prize, Louisville Orchestra Competition Prize și Arts and Letters Award in Music, accorded by the American Academy of Arts and Letters.

Then, you will applause the pianist DANA BORȘAN, soloist of the Radio Orchestra and Choirs,that will perform this time one of the concerts signed by Mozart: Concerto no. 19 in F major for piano and orchestra. The evening will end with Symphony no. 10 by Shostakovich, that had the premiere in 1953, at a few months later after Stalin`s death and about which is being said that is describes through its dramatic nature the Stalinist dictatorship period, despite the fact that the specialists` opinion is different.

Associated conductor of the Philadelphia Philharmonic, CRISTIAN MĂCELARU collaborates with the Métropolitain Orchestra from Montreal, the Symphonic Orchestras from Washington, Seattle, Toronto and Baltimore.

With a blooming career, Cristian Măcelaru began his career along with Philadelphia Orchestra, in the season 2010-2011 he was entitled assistant conductor of the same orchestra, receiving the title of Sir Georg Solti Emerging Conductor Award for the special merits. He studied at the Rice Universiy and obtained the master diploma for conducting. Being also a violinist, Cristian Măcelaru was a concert-maestro of the Symphonic Orchestra from Chicago in order to replace Pierre Boulez. Cristian Măcelaru has successfully begun his career along with the Symphonic Orchestra from Gothenburg, Sweden.

Dana Borșan held concerts and recitals in the Czech Republic, Germany, Italy, Russia, Slovakia, France, Spain, England, China, France, Norway, etc. She is present in every season and on the stages of the philharmonics from the country and her repertory includes over 50 concerts, and also attractive recital programmes and chamber music. Despite the fact she prefers the Viennese classicism works and of the great romanticisms - Schumann, Chopin, Liszt, Brahms - the artist has in her repertory and some special works, presented on a first audition in Bucharest - Concerts for piano and orchestra by Hanns Wolf, Moritz Moszkowski, Siegfried Matthus, Sigismund Toduţă.

In 2006, Dana Borşanand the Chamber Orchestra Radio realised together the most unique project from the the history of the Romanian music - Full concertos for piano and orchestra by Mozart, event realised in concerts with audience, recordings special for Radio library and an album with 8 CDs edited by the ʹCasa Radio ʹ

The pianist has also held a number of recitals with the violinist Alexandru Tomescu with the Sonata Integration for violin and piano by Mozart.

The concert can be listened live at the Radio Romania Culture and Radio Romania Music from the country and in streaming live on the internet on www.radioromaniacultural.ro and www.romania-muzical.ro

The tickets are available on www.eventim.ro, in Germanos, Oramge, Vodafone, Domo, Carrefour shops, Cărtureşti, Humanitas bookshops, in the OMV gas stations and at the box office of the Radio Hall.