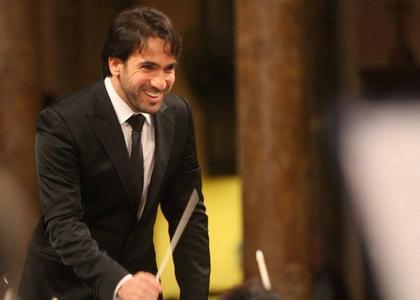 Thursday, 11 February 2016 , ora 10.19
Wednesday, the 17th of February (7 PM), the Radio Chamber Orchestra invites you to Sala Radio at a beautiful concert Mozart-Beethoven where you will see the pianist HORIA MIHAIL, the protagonist of the renowned national tour "The travelling piano" which was a big hit every year in the entire country. In one edition of the tour, the artist suggested to the audience a "100% Mozart" programme and, as a nice flow of this "mozartian adventure", this time Horia Mihail will play at Sala Radio one of the concerts composed by the great Amadeus: Concert no. 17 in G Major for piano and orchestra.

LUBNAN BAALBAKI will be the conducter or this event- he is the regular conducter of the Harmonium Orchestra in Liban, an artist who has a peculiar profesional growth and who studied music at Cluj-Napoca, under the guidance of maestro Petre Sbârcea.

The evening will start with the prelude of Don Giovanni- Mozart, an opera based on the legend of the seductive hero Don Juan and will end with Symphony no. 1 by Beethoven, a work about which they say it has been inspired by his predecessors whom he admired, Haydn and Mozart.

Born in Beirut, Liban, in 1981, in a family of artists, LUBNAN BAALBAKI started studying the violin and the lute at 14 years old, at the National Conservatory from his town, continuing with Saint-Esprit University from Kaslik. During one of his visits in Romania, he has met his mentor, maestro Petre Sbârcea which lead to his admission to the Music Academy "Gheorghe Dima" from Cluj-Napoca, in 2004. He got his license in conducting an orchestra in 2009 and he continued his studies with Masters at the National Music University from Bucharest, taught by maestro Horia Andreescu.

HORIA MIHAIL accompanied for over a thousand times most of the symphonic orchestras in Romania and had concerts, solo programmes and chamber music in 18 countries, on 4 continents. From 2009, he is the solist of the Radio Orchestras and Choirs, a role which he had during many concerts at Sala Radio and he participated at tours inside the country or abroad.

The tours where the artist in involved now, among other solo and chamber projects, are The Travelling Piano, The Violin Duel (with Gabriel Croitoru and Liviu Prunaru), Golden Flute (with the flutist Ion Bogdan Ştefănescu) and George Enescu's Violin in the countryside (with Gabriel Croitoru). In September 2014, Horia Mihail had two concerts in Kuala Lumpur with the Radio National Orchestra and was invited to participate at the second edition of the International Festival "RadiRo", accompanying the Radio Symphonic Orchestra from Prague and the conducter Ondrej Lenárd.

The concert can be heard live on all frequences of Radio România Cultural and Radio România Muzical in Romania and live streaming on the internet at www.radioromaniacultural.ro and www.romania-muzical.ro.