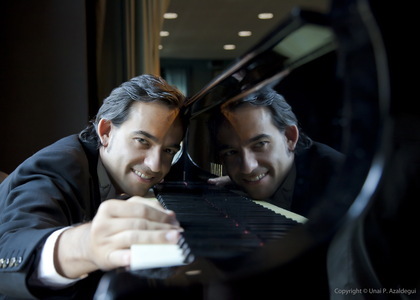 Nights in the Spain's Gardens, at Radio Hall

Monday, 15 February 2016 , ora 9.52
On Friday, 19th of February at 7 p.m. the National Radio Orchestra we invite you all at a special event that will take place under the Spain's flag! At the Radio Hall you will have the occasion to applaud the Spanish pianist JOSU OKIÑENA, known by the Romanian audience thanks to the "Do you like Brahms?" national tour - October 2013 - where the artist was the special guest of the cellist Răzvan Suma. In the evening schedule you will listen to two works that are also under the Hispanic sun: Spain, a sheet music - was composed as a result of a voyage made by the Romantic French composer Emmanuel Chabrier on the Hispanic lands and Nights in the Spain's Gardens, a work signed by Manuel de Falla, one of the great Spanish musicians of the first half of the 20th century. The concert is carried out with the help of Cervantes Institute.

The event will be conducted by NICOLAE MOLDOVEANU, a Romanian musician that has built a beautiful path in the international artistic world. In the second part of the evening at the Radio Hall you will listen to the Symphony No. 5 by Beethoven. A work surnamed The Destiny's Symphony. It is one of the most interpreted works of all the times. The work of Beethoven had its debut in Vienna, in 1808, under the stick of the composer itself. It considered the work with the greatest emotional impact on the audience. The Destiny's Symphony has a great influence over the works of many other compositors like Brahms, Tchaikovsky, Mahler or Berlioz. Schumann was writing about the Beethoven's work: "Although so often heard, still exercises power over time, as those great phenomena of nature, which, no matter how often they occur, fill us with wonder and awe. This symphony will pass over centuries (...). ".

Nowadays university professor and Head of the Research and Doctoral Programs Department at the Muzikene University in San Sebartian, JOSU OKIÑENA has an an important soloistic activity together with artists like Alan Gampel, Miguel Etuarte, Almudena Ortega or Maite Maruri.

Josu Okiñena sang with soloists like Eduard Wulfson, Marta Almajano, Itxaro Mentxaka, Enrique Baquerizo, Lola Casariego and others. He participated at numerous festivals with Chamber bands, festivals like Quincena Musical in San Sebastian and other similar events in Granada, Tours and Peralada. He has a colaboration with the Spanish soprano Almudena Ortega obtaining the entire apreciation of the audience and mass-media for the concerts in Cuba, America and Spain, making in the same time CD records of the entire piano and voice works of the Basque composer Aita Donostia.

The violinist, accompanist, organist and at last but not the least conductor, NICOLAE MOLDOVEANU is one of the Romanian musicians that has created a beautiful path in the international artistic world. His musical training conducted him through apreciated European institution of higher education. From the Conservatory in Leipzig - where he studied the harmonium - to the courses of Conservatory in Zürich - where he was dedicated to the art of conducting - and than to Basel and Berna and at last to the Royal Academy of Music in London.

The concert will be able to be listened live at Radio Romania Cultural and Radio Romania Musical and in streaming live on the internet on the following web-sites: www.radioromaniacultural.ro and www.romania-muzical.ro.

The tickets are available to be bought from www.eventim.ro, from the Germanos, Orange, Vodafone, Domo, Carrefour shops and from the Carturesti and Humanitas libraries, from the OMV oil stations and from the ticket office of Radio Hall.