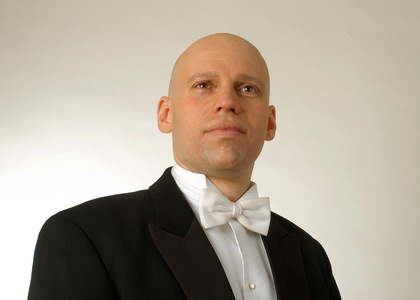 Julien Salemkour conducts 'Daphnis and Chloe' at the Radio Hall!

Monday, 28 March 2016 , ora 12.07
On Friday, 1st of April, at 7 p.m., the French conductor Julien Salemkour, the one who was the assistant of the famous Daniel Barenboim at the State Opera in Berlin, returns at the desk of Radio National Opera! Over the years, he was the guest of imposing institutions like Metropolitan Opera - New York, Teatro alla Scala - Milan, Semperoper - Dresden, Radio Symphonic Orchestra - Berlin.

Under his stick, the Romanian pianist Daniel Goiți, that performed many concerts and repertories in Greece, Austria, France, Germany, Great Britain, U.S.A. etc., will interpret one of the most touching music sheets that have ever been composed: Tchaikovsky - The Piano and Orchestra Concerto, No.1.

The evening program will also include Daphnis and Chloe, the ballet in a single act by Maurice Ravel that was many times considered one of the greatest French composers of the Modern Age. The Choreographic Symphony, as it was named by its author, was inspired by the story of the ancient Greek Longus (the second century A.D.), a love story that was happened in a pastoral environment and which was transformed in a successful ballet on the stage of Châtelet Theatre in Paris in 1912. It was a part of the well-known series of shows offered in the Russian Ballets' season under the leadership of the manager Serghei Diaghilev. His work will be interpreted by the Radio Academic Choir prepared by Ciprian Tutu.

The French conductor JULIEN SALEMKOUR started his musical training taking piano lesson since he was 9 years old. When he was 16 years old, he was admitted at Musikhochschule in Hannover and he perfected his studies at the Mozarteum University in Salzburg.

From 2001, he had been the assistant of the conductor Daniel Barenboim at the State Opera in Berlin where he conducted over 200 performances that included opera, ballet and symphonic music concerts like: Romeo and Juliet by S. Prokofiev, The Swan Lake - P. I. Tchaikovsky, The Magic Flute, Don Giovanni, Cosi fan tutte, Le nozze del Figaro - W. A. Mozart, The Barber of Seville by G. Rossini, Spring Celebration, The Firebird by I. Stravinsky, Turandot, Tosca by G. Puccini, The Power of the Destiny, Macbeth by G. Verdi, Faust - F. Busoni, Manon - Massent, Lohengrin - R. Wagner.

In 2006, Julien Salmkour was invited to take, as a last-minute option, a concert scheduled to be conducted by Daniel Barenboim with the occasion of 250 years since the Mozart's birth. Julien Salemkour had been not only in the role of conductor, but also as pianist. The Concert was live transmitted in 23 countries all over the world.

The pianist DANIEL GOITI, graduated of the Gheorghe Dima Academy of Music - Cluj, had perfected his artistic studies at the Academy of Arts in Berlin. He was the guest of many important festivals and presented concerts and repertoires in Greece, Austria, Moldavian Republic, France, Hungary, Germany, Great Britain and U. S. A. He performed together with some of the most important orchestras and he had repertoires in Romania and abroad.

Over the years he won many awards at numerous national contests and he was the winner of George Enescu Contest and of the Arthur Schanbel International Contest in Berlin, and in the present he is invited to be part of the jury of important competition.

The concert can be listened live on all stations of the Radio Romania Cultural and Radio Romania Muzical from Romania and in streaming live on the internet on http://www.romania-muzical.ro/ and http://www.radioromaniacultural.ro

The tickets are available on http://www.eventim.ro, in Germanos, Orange, Vodafone, Domo and Carrefour shops, in the Carturesti and Humanitas libraries, OMV oil stations and they can also be bought from the ticket office of Radio Hall