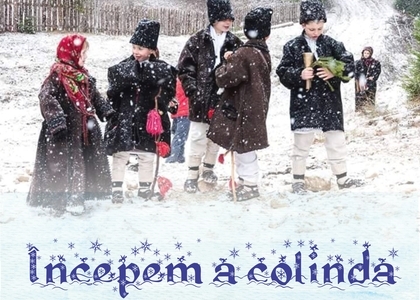 We start carolling at Sala Radio

Thursday, 15 December 2016 , ora 13.12
For 26 consecutive years, around the holly celebration of our Lord's birth, the Radio's concert hall brings us the customs and traditions of this time of the year.

Among the several carol concerts from Sala Radio, a special one is the traditional carol concert We start carrolling/ Începem a colinda... which reunites on our stage people from the world of the Romanian countryside.

On Sunday, the 18th of December, at 17:00, in the traditional concert We start carolling..., organized by Radio România, traditional singing groups from Alba, Arad, Gorj, Maramureş, Mehedinti, Sibiu, Suceava, Teleorman, will bring to the audience in Bucharest the Holly Carols, the customs and traditions of Christmas and New Year's Eve, as they do in their village.

An impressive number, over 200 people from the caroling groups- children, youths and old people, with proper props (twisted bread, apples, nuts, saussages, ţuică) will show to our audience at Sala Radio the customs preserved in our villages from one generation to another.

Tickets are available on www.eventim.ro, in stores such as Germanos, Orange, Vodafone, Domo, Carrefour, the Cărtureşti and Humanitas bookshops, in OMV gas stations and at the ticket booth at Sala Radio.