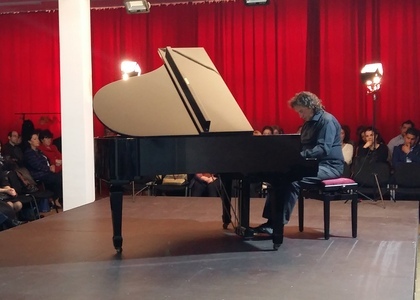 The Traveling Piano Tour - sold out concert at Sala Radio

Thursday, 13 April 2017
After a journey through Moldavia, over and beyond the river Prut, and through Transylvania, already counting up to 7 concerts, over 2000 spectators and rounds of applause that lasted for several minutes, the 7th edition of The Traveling Piano Tour, taking place between the 5th of April and the 4th of May, reaches Bucharest for the gala concert in front of the fastidious audience at Sala Radio. The concert is already sold out, but Horia Mihail, the soloist of Radio România, can be heard live on national radio frequencies of Radio România Cultural and Radio România Muzical, but also throughout the world, on both their webpages and on the mobile apps.

The musical suggestion that pianist Horia Mihail makes is the Waltz:

"The program is highly appreciated by the audience. I have chosen two geographical areas in Europe well known for their compositions: Vienna and its surroundings, by performing Schubert, Brahms and Dvorak in the first half of my program, then I take a leap all the way to Paris, with the help of Chopin, and with the works of Ravel and Debussy I introduce a different type of waltz. One thing is certain, these waltzes are strictly for concerts, and not for dancing. It is a higly pleasant music, highly diverse, despite the concert containing solely waltzes.

The audience is comprised of young people and elders alike. Thus, the Traveling Piano, the project of Radio România and the Accendo Association does its job diligently and they notice that in the places in which the traveling pianos were left in the previous years, such as Roman, Deva and Alba Iulia, places I have revisited, numerous high quality musical events are taking place."

It might not be easy to bring such events to smaller cities, but here's what one of the local tour entertainers has to say about it:

"I think people could easily create a Traveling Piano Fan Club, it would probably have a lot of followers, and even if they aren't numerous, they would probably be consistent. People expect it every year, the context is not always financially favorable, sometimes you need to overcome the endurance of some people, for whom only the thousands of people that gather to see them matter. I kept being told: This is called elitism… Well, we accept this accusation."

The story of this tour is already well known, it takes place with the purpose of bringing joy to music lovers, but it also has the generous objective of giving away a concert piano to a small town to use it for the next few years. After the 7th tour, the piano will remain in Caracal, city that has hosted in its beautiful theater hall numerous performances organized by Radio România, always being filled by the audience which rewarded the artists with rounds of applause, showing its appetite for quality music. From the moment the Traveling Piano will be given to the community to be used for a determined period of time, other important music events will most likely occur in the city.

The itinerary of the tour can be found on www.pianulcalator.ro or on the public radio stations' frequencies.

Two other performances have been added by request from the audience: