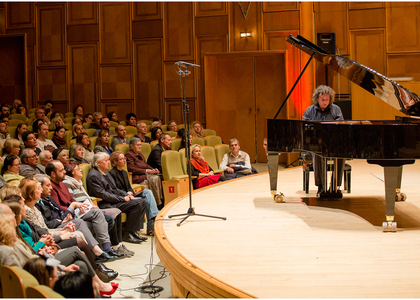 'The Travelling Piano' heads to Caracal, its final destination, via Buzău, Târgovişte, Slatina

Friday, 21 April 2017
During his trips across the country, after years when he performed on stages from big and small cities, Horia Mihail realised that the pianistic "infrastructure" is very weak. Many big musical events aren't possible because there are cities in which, although there are people who would want, there is no concert piano.

This is how the "Travelling Piano" Tour appeared, organised by Radio România and the Cultural Association Accendo, now at its seventh edition. In 2011, Horia Mihail decided to follow the example of the great composer Franz Liszt which, at his time, travelled in the then-Romania accompanied by a concert piano and to try to offer joy to the audience in cities where musical events are more rare or even none. With the support of Radio România which offered him its pianos, these found new temporary houses in Romanian cities which didn't have one.

After Horia Mihail performed for several times in cities in Moldova and Transilvanya, but also in Bucharest at Sala Radio, it is time for the piano to go from the Radio România's headquartes towards cities where there are no concert pianoes.

This time, to encourage other important musical events, the piano with which Horia Mihail will travel with will remain for the next years at Caracal, after his performance at the National Theatre on the 27th of April.

But before he meets with the piano from this year, Horia Mihail will go to Tulcea to play there on another travelling piano, gifted to the community in 2013.

The piano, offered by the Romanian Broadcasting Society, will arrive in Caracal, a very special city, one where you can still see its richness from the Interbelic period, with aristocratic houses, many in terrible shape and only some restaured. This is a good thing because at the Theatre in Caracal, which is an architectural jewel, there are many events going, thanks to one person who solely tries to mantain a high cultural level in the city and to bring as many musicians or actors on that stage. That's why I think that the travelling piano will have a good home in Caracal. (Horia Mihail)

But until he arrives in this city, Horia Mihail and the concert piano will be able to be heard with recitals which include a special programme with concert waltzes in Buzău, Târgovişte and Slatina. In each city, the piano will arrive with a car offered by Senia Music and will be descended, mounted and chorded by a specialised team.

The tour's story is inspired by the example of Franz Liszt. The great composer and pianist made a concert tour in our country in 1846 and 1847, coming with a concert piano. His concerts in communities where these kind of events were extremly rare were really appreciated by the audience. Liszt's arrival itself in cities such as Timişoara, Arad, Cluj, Iaşi or Bucharest was an events in itself. In Timişoara there was a message on a specially built arch in the square in front of the cathedral saying: "Welcome, Franz Liszt!" The buildings windows were lit, the balconies filled with flowers. Many of this tour's concerts also had a humanitarian side. Franz Liszt had donated the profit to build a school, some of the money was given to the poor, some donated to several music associations.

At the audience's request, there are two more recitals: