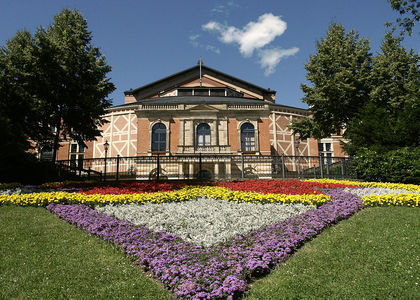 Between 25th July - 3rd August, Radio Romania Music broadcasts live seven performances within the "Richard Wagner" Festival in Bayreuth, one of the most important opera festivals worldwide and a reference point for all lovers of Wagner's music. The live broadcasts will be transmitted on Radio Romania Culture, as well.

The series of live shows debuts on 25th July with the performance of The Mastersingers of Nuremberg, conducted by the Swiss director Philippe Jordan, who returns to Bayreuth with this production after the Parsifal he directed in 2012. The role of Hans Sachs will be interpreted by the bass-baritone Michael Volle, a singer who has achieved important successes in Wagner's roles he performed in the most important opera theatres in the world.

On 26th July, you can listen to Tristan and Isolde, with three famous singers starring: Stephen Gould, Petra Lang and René Pape. The conductor will be the reputed Christian Thielemann, the same as the previous edition. The next performance will be Parsifal, the last musical drama composed by Richard Wagner, on 27th July, with tenor Andreas Schager in the title role, a singer who began his singing career in operettas, but who has evolved to the status he has today when he is considered an extraordinary Wagnerian tenor.

Between 29th July and 3rd August, you will be able to listen to the tetralogy The Ring of the Nibelung, the landmark of Wagner's creation, an epic that inspired many other literary and dramatic works, with reverberations to the present, if we come to think of, for example, the cinematographic series entitled The Lord of the Rings. Important opera singers will perform under the baton of Marek Janowski who also conducted the same tetralogy at the "George Enescu" International Festival in Bucharest in 2013.

The Bayreuth Festival was set up in 1876 by Richard Wagner and is being staged at the "Festspielhaus", a building designed by the composer himself to accommodate the staging of his musical dramas. After Wagner's death, the festival has been organized by Richard Wagner's direct descendants and is one of the most important events in the German and international music life. Currently, the manager of the festival is Katharina Wagner (39 years old), Richard Wagner's great-granddaughter; she is also the director of the performance Tristan and Isolde staged at Bayreuth in 2017.

The performances that will be broadcast live between 25th July and 3rd August, due to our collaboration with the European Broadcasting Union (the EBU), are as follows: