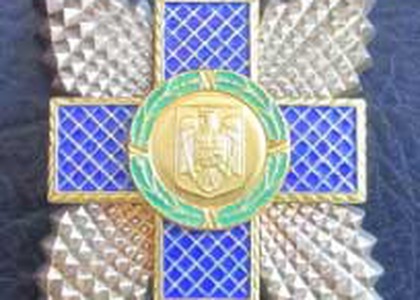 The Minister of National Culture and Identity, Mr. Lucian Romașcanu, proposed the decoration of the "George Enescu" Philharmonic to Romanian president, Klaus Werner Iohannis, with the "Cultural Merit" Order, celebrating National Culture Day on the 15th of January 2018.

This proposition is the result of next year's 150 year anniversary of the Philharmonic. Founded in April 1868 under Eduard Wachmann, the purpose of the "Romanian Philharmonic Society" was the creation of a permanent symphonic orchestra in order to spread the musical culture and promote the masterpieces of classical music. The first concert took place on December 15th the same year, under the baton of its founder. After the death of George Enescu in 1955, the Philharmonic took his name.

"The George Enescu Philharmonic is undoubtedly one of the fundamental institutions of the national culture, whose prodigious and long-lasting activity significantly marks the Romanian performing arts. A generous host for personalities of the international lyrical art, the Philharmonic itself honored the most famous stages worldwide and performs every time reaching an excellent level", says the proposal sent by Minister Lucian Romaşcanu.­­