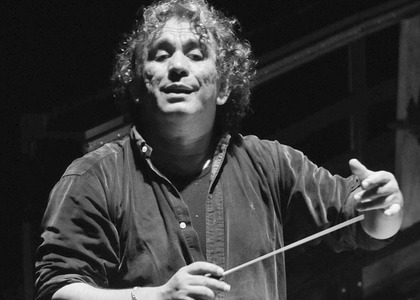 Conductor Nicolae Moldoveanu will be on the podium in front of the National Radio Orchestra on Friday, January 19th, starting from 19.00, at the Radio Hall, in a concert that will include the Dances of Galanta by Z. Kodály, the Concerto in E minor for violin and orchestra, op. 64 by F. Mendelssohn and the Symphony no. 3 in E flat-major, op. 97 - Rhenish by R. Schumann. Violinist Cristina Anghelescu will be the guest soloist for the evening. The concert will be organized in collaboration with the Balassi Institute - The Hungarian Institute in Bucharest.

As a complex musical personality - conductor, violinist, assistant music master and organist - Nicolae Moldoveanu finished his studies at the Royal Music Academy in London. He performs regularly in concerts with prestigious European orchestras and is interested in opera as well, a genre which he excels at, and collaborates with opera houses in Sweden, Canada and the United Kingdom.

Soloist of the Radio Romania Orchestras and Choirs, Cristina Anghelescu is an active presence on the Romanian musical stage. She was invited to play in famous halls such as the Schauspielhaus in Berlin, the Tchaikovsky Hall in Moscow, Teatro Monumental y Auditorium in Madrid, Smetana Hall in Prague, St. John's Smith Square in London or the Finlandia Hall in Helsinki. She has toured many times in Europe, but also in Taiwan, South and North America and South Africa.

The complexity of musician Nicolae Moldoveanu's artistic personality is revealed in his performances as a violinist, assistant music master, organist and, last but not least, as a conductor. Nicolae Moldoveanu was born in Hunedoara and studied the violin at Deva. His musical track took him to the Leipzig Conservatory, where he studied the organ. Drawn by the craft of leading and orchestra, Nicolae Moldoveanu attended the Conservatory in Zurich, then continued his studies in Basel and Bern.

He had the opportunity of doing his apprenticeship under famous professors such as Wilfried Bötccher, Antal Doráti, Horst Stein and Ralf Wikert. Among the conductors whose masterclasses he attended are Colin Metters, Leonard Slatkin, Sir Colin Davis, Lotha Zagrosek, Ilya Musin, Sir Roger Norrington and Sergiu Celibidache, who had a crucial influence in his artistic career.

His artistic repertoire is rounded up by recordings for the South Africa Broadcasting Corporation, Bavarian Broadcasting, Radio 3 BBC.

Maestro Nicolae Moldoveanu is an esteemed collaborator of the London Royal Orchestra. In order for him to perform the Symphony no. 3 with organ by Saint-Saëns with this famous orchestra, the Northampton municipality (the region where the concert took place) even approved the rental of a concert organ.

Cristina Anghelescu started studying the violin at 6 with her father, violinist Aurelian Anghelescu, who carefully and professionally guided her artistic evolution. Cristina Anghelescu then graduated from the Bucharest University of Music, in the class of maestro Ștefan Gheorghiu (a pupil of David Oistrakh), and is currently a soloist of the Radio Orchestras and Choirs in Bucharest.

Cristina has been an active presence on all the Romanian stages ever since she was a student. She has been invited time and again to play in famous halls such as the Schauspielhaus in Berlin, the Tchaikovsky Hall in Moscow, Teatro Monumental y Auditorium in Madrid, Smetana Hall in Prague, St. John's Smith Square in London or the Finlandia Hall in Helsinki. She also performed in concert with important orchestras in Dresden, Paris, Prague, Bratislava, Carcas, Moscow, Budapest, London, the Radio Helsinki, Madrid, Moscow Philharmonic and other orchestras. She collaborated with famous maestros such as Leif Segerstam, Jukka Pekka Saraste, Erich Bergel, Yuri Simonov and all of the Romanian conductors. She has toured and played in recital in Europe, but also in Taiwan, South and North America, South Africa. She was a guest of the Prague Spring Festival and the Helsinki Festival. She has done many recordings, many of them edited out on CD, with concerts by Mozart, Tchaykovsky, Mendelssohn-Bartholdy, Vivaldi's Seasons and the two Concerts by George Lloyd, with the famous Philarmonia orchestra in London.