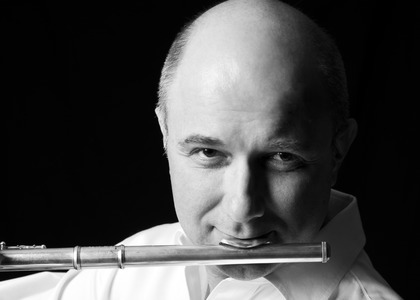 Flautist Ion Bogdan Ștefănescu in concert at the Radio Hall

Friday, February 9th 2018, at 19.00, flautist Ion Bogdan Ștefănescu, lead performer of the "Magical Flute" tour, will return to the Radio Hall in a concert with the National Radio Orchestra. The conductor will be Anastasios Symeonidis, who is currently the artistic director of the Greek Radio Orchestra, a musician with both Greek and international accolades on the artistic stage.

The evening will start with a work from the Romanian repertoire - Twilight in Autumn by A. Alessandrescu, followed by the Concerto in E minor for flute and chord orchestra by S. Mercadante. The schedule will end with the Symphony no. 1 in C major, op. 21, by L. Van Beethoven.

As a lead flutist of the George Enescu Philharmonic, a flute professor at the Bucharest National University of Music and soloist of the Banatul din Timișoara Philharmonic, Ion Bogdan Ștefănescu is the first Romanian flutist to play a golden Muramatsu flute in concert. He has been going on the national tour called "The Magic Flute" for seven years now, a unique musical experience which has had an impressive success.