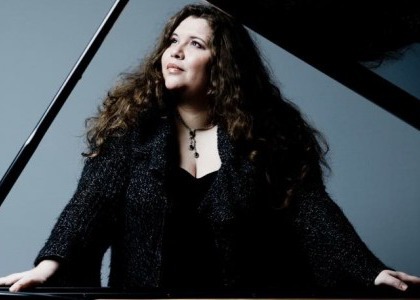 Rhapsody on a Theme of Paganini for piano and orchestra

The tickets can be bought from the Romanian Athenaeum Ticket Office.

Piano player Plamena Mangova began her studies with teacher Marina Kapatsinskaya at National Academy of Music "Pancho Vladigerov" in Sofia, continuing at Queen Sofía College of Music in Madrid under the guidance of the great master Dmitri Bashkirov. Other teachers that she studied with were Abdel-Rahman El Bacha, Leon Fleischer, Rosalyn Tureck, Krystian Zimermann, Andras Schiff. She is laurate of prestitigous piano and chamber music constests, among them: "Paloma O'Shea" taking place in Santander, "Vittorio Gui" taking place in Florence and Juventus Festival in France.

Her recordings are unanimously appreciated by professional critics, her first CD, including works by Dmitri Shostakovich, having been awarded with Diapason d'Or in 2007. Another disc which was produced together with soprano Tatiana Melnychenko, violin player Natalia Prischepenko and violoncello player Sebastian Klinger, was awarded with Superfonic Prize by Pizzicato magazine. The following recordings were equally successful: Burleske by Richard Strauss (2008), Piano Concerto No. 1 by Brahms (2010) and the most recent CD with works by Franck and Ysaÿe produced together with the violoncello player Alexander Kniazev.