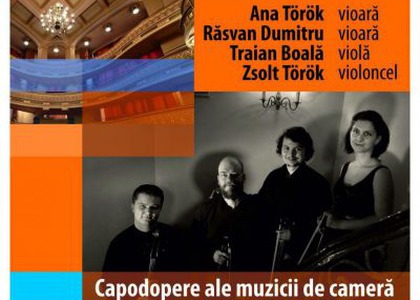 The Arcadia Quartet in Bucharest and in the United Kingdom

The "Tinerimea Română" National Art Centre invites you to an Arcadia Quartet recital on Tuesday, February 13th 2018, starting from 19:00, at the Palace of the Romanian Youth and on Wednesday, February 14th 2018, starting from 19:00, at the Romanian Athenaeum. The members of the quartet are Ana Török - violin, Răsvan Dumitru - violin, Traian Boală - viola and Zsolt Török - cello.

Starting from February 15th, the Arcadia Quartet will go on a tour in the UK, as esteemed guests during the musical seasons of some of the most important chamber music societies in the UK, such as Leamington Music, Newton Abbot and District Society of Arts, the Chichester Chamber Concerts, the Nicholas Yonge Society and the Ipswich Chamber Music Society. In April, the members of the quartet will hold a second and final recording session in order to complete the full Béla Bártok quartet collection at the Chandos Records record label. The recording sessions will take place in the UK at the famous Potton Hall.

Well-known internationally in the world of chamber music, the ARCADIA Quartet was formed in 2006 during the study years at the "Gheorghe Dima" Music Academy in Cluj.

The event is organized by the "Tinerimea Română" National Art Centre in collaboration with the "George Enescu" Philharmonic, and the media partners are Radio Romania Music and Radio Romania Cultural.

For more information regarding the activity of the "Tinerimea Română" National Art Centre, visit www.tinerimearomana.ro.