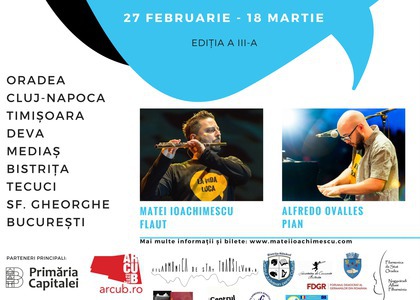 The Romanian flautist, Matei Ioachimescu and the Venezuelan pianist, Alfredo Ovalles, whose careers know the international consecration, invite you to a trip around the world during the third edition of the La Vida Loca tournament. The unique, cross-over program will be hosted by nine cities in Romania, between February, 27 and March, 18, 2018, from Oradea and Cluj, to Timisoara, Deva and Bucharest.

Matthew Ioachimescu, the flutist whose musical journey began in Romania and perfected at the Vienna Music Academy, along with Alfredo Ovalles, formed at the Universities of the United States and Austria, offer you an escape from the daily.

The two virtuoso and versatile musicians, have a repertoire which vary from baroque music to contemporary creations, collaborating with ensembles from Europe to Japan.

For this year's edition of the tournament, the two selected scores that break the boundaries between classical jazz music and contemporary pop-rock sounds.

Matei Ioachimescu and Alfredo Ovalles challange you to discover that, the sound and the rhythm, when they embrace the most vibrant emotions of joy and nostalgia, burning sensations, sprinkled with humor and explosive energy, always make you feel like home.

Matthew Ioachimescu's flute is the instrument through which this musician not only expresses his mastery, but also his involvement in artistic mentoring activities in Austria, Japan, Hungary, Croatia and Romania, as well as in the cultural diplomacy commitments which were entrusted to him by the current Chancellor of Austria, Sebastian Kurz, since 2013.

Information about concert halls and tickets can be found on www.mateiioachimescu.com, as well as on the facebook page La Vida Loca - Matei Ioachimescu Flute, Alfredo Ovalles Piano.


Translated by Denisse Grigore,
MTTLC, the University of Bucharest
Return to archived Events