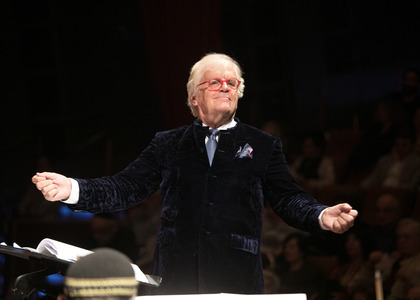 Scheherazade by Rimski-Korsakov at the Radio Hall

Friday, February 16th, starting at 19.00, the Radio National Orchestra invites you to a world of fairy-tale sonorities in the symphonic suite Scheherazade by Rimski-Korsakov, a work that is featured in the second part of the concert at the Radio Hall. In the first part, the orchestra will perform the Concerto in B minor for cello and orchestra, op. 14, by A. Dvořák. The orchestra will be led by German conductor Justus Frantz, a prominent personality of contemporary music, appreciated for both his artistic vision and his special attention towards promoting young musicians.

The soloist invited during the first part, performing the Concerto in B minor for cello and orchestra by Dvořák, will be cellist Răzvan Suma, a very active musician, main figure of the Vă place ...? tours (Do you like… ?) that in recent years have won the hearts of the audience in Romanian concert halls.

Soloist for the Scheherazade suite by Rimski-Korsakov will be violinist Adrian Florescu, first violinist of the Radio National Orchestra.

For more information regarding the Radio Orchestras and Choirs, please refer to www.orchestreradio.ro.

Justus Frantz is a complex musician who has dedicated his full creative attention to music and is one of the most prominent personalities of the contemporary artistic life. He is also an unwavering promoter of the young generations of musicians. During the project Philharmonic of the Nations he has supported many young artists, whose artistic careers have crystalized through the help offered by maestro Justus Frantz as well. He has invited artists such as Midori, Maxim Vengerov, Vadim Repin or Evgeny Kissin to take part in the Schleswig-Holstein Festival. He was also the one to discover soprano Anna Netrebko's talent early on and invited her to perform Susanna from Mozart's Magic Flute at Saint Petersburg.

Justus Frantz's artistic career started in 1967, when he won the famous ARD competition. He took part in masterclasses held by Professor Wilhelm Kempff, and when he was 23 he became the youngest musician to ever be awarded a grant by the German National Academy Foundation.

Looking with admiration and inspiration to Herbert von Karajan or Leonard Bernstein, maestro Justus Frantz has continuously supported young musicians by creating the Philharmonic of the Nations in 1995, where he has been main conductor and musical director to this day.

By capitalizing on the potential of classical music from the desire to make the art of music known and accessible to everyone who would like to enjoy listening to interesting artistic programmes in concert halls, Justus Frantz created the Schleswig-Holstein Festival in 1986. For his extraordinary cultural merits, maestro Justus Frantz was awarded various prizes, distinctions, he was a Special Correspondent representing the United Nations' Commissariat for Refugees and was given the Grand Cross distinction.

Recognized as a conductor of special refinement, Justus Frantz is the guest of famous orchestras or cultural institutions from around the world, such as: the Mariinsky Theatre in Saint Petersburg, the Great Symphonic Orchestra in Moscow, the philharmonic orchestras in Durban, KwaZulu-Natal, the Sinfonia Varsovia, the Georgia Chamber Orchestra.

Răzvan Suma is one of the most active young Romanian musicians, with a vast repertoire presented in hundreds of recitals and concerts performed worldwide. He plays on the stages of prestigious international festivals. Apart from his concerts in Romania, he often plays with Spanish pianist Josu Okiñena. The two of them have performed in concert in halls such as the Auditoria Nacional de Madrid, the Teatro Colon in Buenos Aries, the Belém Cultural Centre in Lisboa, the Kursall in San Sebastian or the Casa de Musica in Porto.

"Cellist Răzvan Suma has fascinated the audience through his talent, sensibility and intelligence." - this is how the famous German publication Das Orchester characterized the young Romanian cellist.

Răzvan started and organized national tours from 2012. The series of projects Vă place Bach?, Vă place Brahms?, Vă place tango? and Vă place Sschu...? have placed Răzvan among the most active Romanian cellists. To this we can add the tours Spanish Evening and British Evening and the tours of the ArgEnTango group - Piazzolla, o poveste autentică (Piazzolla, a true story) and Tango la Cetate (Tango at the Fortress).

He has collaborated with important names of the international classical music, such as Maxim Vengerov, the Borromeo Quartet, the Voces Quartet, Silvia Marcovici, Cristian Mandeal, Horia Andreescu, Christian Badea and Misha Katz.

In 2009, Răzvan Suma became soloist of the Radio Orchestras and Choirs. As associated professor at the Bucharest University of Music, he has had an intense teaching activity. He is invited to give masterclasses in Spain, Argentina, Korea. In Romania, the masterclass Muzica la Altitudine (Music with an Altitude), organized alongside violinist Ştefan Horvath, has become a point of reference.

From 2006 to the present day, Răzvan Suma has been on six tours as a trio - the Romanian Piano Trio or the Trio Strad, alongside Alexandru Tomescu, Horia Mihail, and Toma Popovici. He is also a part of the cello quartet Cellissimo, alongside Marin Cazacu, Alexandra Guţu and Octavian Lup, with performances on stages in Italy, Portugal, Macao and Morocco.

Apart from his constant presence in the field of classical music, Răzvan Suma has also taken part in less conventional projects, aimed at a younger audience who is open to innovation and to a mix between musical genres. His most recent project of this nature is his collaboration with the rock band Viţa de Vie in April 2013, when one of the songs of the album Acustic was recorded with Răzvan Suma.

Prestigious competitions such as Giovanni Batista Viotti - Italy, Markneukirchen - Germany and Villa de Llanes - Spain are just some of the most important prizes won by Răzvan Suma in his career as a national and international contestant, started at the age of six.

In May 2012, as a corollary to the national tour Vă place Bach?, Răzvan Suma released in the foyer of the Radio Hall in Bucharest the first complete Romanian CD recording of the suites for cello solo by Bach. The CD - which has a modern, attractive concept behind it - was produced with the help of the SONORO RECORDS production company.