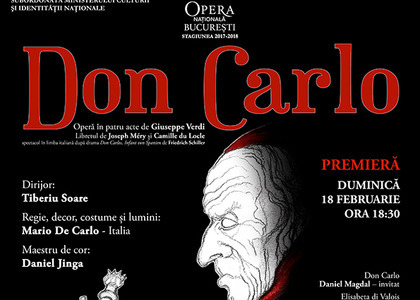 A new premiere on the stage of The Romanian National Opera, Bucharest

Mario De Carlo took charge of the production, the setting, the costumes and the lights of the performance. The great master Tiberiu Soare will be at the conductor music stand. The Choir of The Romanian National Opera will be prepared by Daniel Jinga. The show cast includes important people of the first Romanian lyrical stage, as well as artists that are internationally recognized.

Mario de Carlo talks about the premiere of "Don Carlo" by Giuseppe Verdi which will take place on the first lyrical stage of the country:

"The stage director role (including scenography and costumes) in Don Carlo case feels like throwing yourself off the Acapulco cliff. Although you know that you will survive it - because others did it before you - the risk of getting hurt is too big; and the most important part is that the adrenaline tenssion is too high. Such powerful emotions that are full of satisfaction are hard do explain.

In Don Carlo we are facing great characters. It is true that this happens in many works of Verdi (let's think about Violetta, Rigoletto, Azucena and more), but in this case they are all very important and participating together."

The Italian stage director Mario de Carlo graduated with a Bachelor of Specialized Studies at "La Sapienza" University in Rome with master Fedele D'Amico. He collaborated with many lyrical theatres in Italy and the entire world like: "Filarmonico" Theatre in Verona ("Don Pasquale" by G. Donizetti), The Verona Arena ("Cavalleria rusticana" by P. Mascagni), "Massimo" Theatre in Palermo ("Cinderella" by G. Rossini). During the Puccianiano Festival in Torre del Lago he signs the scenography of operas "Le Villi" and "Il Tabarro" by G. Puccini.

On the stage of the Communal Theatre "F. Cilea di Reggio Calabria" he is in charge of the staging, scenography and costumes for the following performances: "Pagliacci" by R. Leoncavallo", "Rigoletto" by G. Verdi with Ștefan Pop, "Turandot" by F. Alfano and G. Puccini with Giovanna Casolla and Nicola Martinucci, "Werther" by J. Wolfgang von Goethe with Giuseppe Filianoti, "La bohème" by G. Puccini with Amarilli Nizza, "Lucia di Lammermoor" by G. Donizetti with Desirée Rancatore, "The Merry Widow" by F. Lehár with Paoletta Marrocu in her debutant role, the protagonist being Alessandro Safina.

The Count of Lerma:

With the participation of The Romanian National Opera Orchestra and Choir

The tickets can be bought from The Romanian National Opera ticket office or online, at http://tickets.operanb.ro.