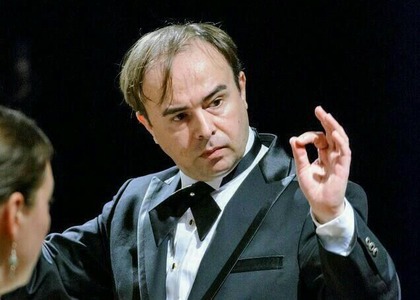 Conductor Ciprian Marinescu, from the stages of Japan to the Radio Hall

On Wednesday, March 7th, at 19.00, the Radio Chamber Orchestra invites you to a Beethoven & Mozart concert at the Radio Hall, performed by a conductor whose career spans over two continents, Europe and Asia - Ciprian Marinescu.

The main guest, the conductor of the prestigious Kansai Philharmonic Orchestra, Ciprian Marinescu is a well-known presence on the Japanese musical stage, both as a conductor and as a performer of chamber music. With the occasion of the concert in Bucharest, he will bring to the Radio Hall - as guest soloist -pianist Hiroaki Yamaguchi, an musician appreciated both in Japan and on an international level, who is also a very talented arrangeur.

The schedule for the evenig will feature the Overture The Creatures of Prometheus, Op. 43 and the Piano Concerto No.1 in C major, Op. 15 by Ludwig van Beethoven and the Haffner Symphony No.35 in D major by Mozart.

The concert can be heard live on Romania Cultural Radio and Radio Romania Music from all over the country and on live streaming at www.radioromaniacultural.ro and www.romania-muzical.ro.

Tickets and the membership cards for the events of the Radio Orchestras and Choirs can be purchased online at www.bilete.ro or at the Radio Hall ticket office. They are also available at offices of the Romanian Post and in the Germanos and Inmedio stores that have Bilete.ro stickers.

For more information on the Radio Orchestras and Choirs, visit www.orchestreradio.ro.