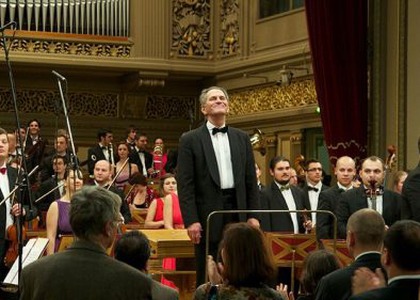 The concert will feature the Rhapsody no. 2 by George Enescu, the Hungarian Fantasy S123 and the Piano and orchestra concerto no. 2 by Liszt, where the soloist will be the Bulgarian pianist Plamena Mangova; during the second part of the evening, the audience will hear Rachmaninoff's Symphony no. 2.

Pianist Plamena Mangova is very passionate artistic presence, having lived up to the international prizes she has won by giving impressive solo performances alongside the greatest orchestras of the world, such as the Rotterdam Philharmonic, the Torino Orchestra, the Moscow Tchaikovsky Symphony Orchestra, the Tokyo Philharmonic and others.

The same program will be performed again on March 18th in the Theatre Hall in Ruse in the context of the International March Music Days Festival, which is currently at its 58th edition and where the Romanian Youth Orchestra has become a perennial guest.

The Romanian Youth Orchestra under the baton of Cristian Mandeal will perform the Rhapsody no. 2 by George Enescu and the Symphony no. 2 by Rachmaninoff. This time, the two pieces will frame Saint-Saëns's spectacular work, Introduction and Rondo Capriccioso op. 28 for violin and orchestra, with Dan Iulian Druțac as the soloist.

For more information on the activities of the 'Tinerimea Română' National Centre and the Romanian Youth Orchestra, go to www.tinerimea.ro.

The Romanian Youth Orchestra was formed in 2008 through the initiative of cellist Marin Cazacu as an artistic and education program supported by the 'Prietenii Muzicii - Serafim Antropov' Foundation and Lanto Communication. Since 2014, it has worked under the auspices of the 'Tinerimea Română' National Centre. The project brings the best young musicians in Romania together for a unique artistic experience that has the purpose of achieving a high level of performance. The Romanian Youth Orchestra is considered to be the best Romanian orchestra of recent years and has made a name for itself internationally as well, as it is held in high regard by European critics as one of the top ensembles of the world.

Ever since the beginning, Cristian Mandeal was the one preoccupied with putting together the ensemble. Under his artistic leadership, the orchestra has become a successful story of the Romanian musical world. Through the ability to transform every concert in a memorable event, he thus gives Romania an international-level orchestra that imposes a standard through excellence.

The result is a unique orchestra that receives full house standing ovations at the Romanian Athenaeum, at the Radio Hall, at the 'George Enescu' International Festival and on international stages such as l'Auditorium Parco della Musica in Rome, the Ravello Festival and the Mahler Festival in Toblach - Italy, the 'March Music Day' Festival in Ruse, the Youth Orchestras Festival in Milan, the Aix en Provence Festival, the Konzerthaus in Berlin and the Berlin Philharmonic.

As of November 2011, the ensemble is a member of the European Federation of National Youth Orchestras (EFNYO). As member of this institution, the Romanian Youth Orchestra is an active participant of the EXchange program, meant to assure the best possible circulation of the most valuable young musicians in the programs organized by the European youth orchestras.

Considered an artistic project that has already reached its maturity, the Romanian Youth Orchestra continues its journey through the world of quality music and international acknowledgment, as it is an ensemble educated in a professional spirit in an exceptional artistic environment.

In his over 40 years of conducting, Cristian Mandeal has performed both abroad and in Romania.

He studied at the Ciprian Porumbescu Conservatory for 10 years (1965-1975), with piano as his main instrument, as well as conducting (with Constantin Bugeanu) and composition (Ștefan Niculescu), later improving upon what he studied at Berlin (Herbert von Karajan, 1980) and Munich (Sergiu Celibidache, 1990). He started as an assistant music master at the Romanian Opera House in Bucharest (1974-1977). He then became conductor of the Philharmonics in Târgu Mureș (1977-1980), Cluj (1980-1987) and Bucharest (1987-2009). He was the artistic director of the 'George Enescu' International Competition and Festival, editions 2001 and 2003. As a principal conductor and general manager of the George Enescu Philharmonic (1991-2009), he elevated it to new and extremely high standards, leaving behind him a trade-mark institution for Romania. Abroad, Cristian Mandeal has conducted hundreds of concerts as a guest of dozens of orchestras on 4 continents, 35 countries and 31 capitals. He took part in many prestigious international festivals in the company of some of the most currently reputed soloists. He was the artistic director of the Northern Israelian Orchestra - Haifa (1999 - 2002) and of the National Basque Orchestra - San Sebastian (2001 - 2008), a permanent conductor of the Haydn Orchestra in Bolzano e Trento (2000 - 2003), principal guest conductor of the Manchester Halle Orchestra (2003-2008) - the first person ever to receive this position in the 150 years since the orchestra was founded -, of the Belgrade Philharmonic (the 2006-2007 season) and of the Copenhagen Philharmonic (2006 - present).

A point of great interest Cristian Mandeal's recent activity is the collaboration with the Romanian Youth Orchestra, which he has been cultivating, educating and conducting constantly since 2008.

Admired for her unique art of eliminating any possible tension induced by technical difficulties, pianist Plamena Mangova studied at the Stat Conservatory in Sofia and continued her artistic education with important artists such as Dmitri Bashkirov and Abdel-Rahman El Bacha, receiving very good comments from illustrious stage partners such as Leon Fleisher, Rosalyn Tureck, Krystian Zimerman and Andras Schiff.

Her career has been rewarded with international prizes at important competitions, such as the Queen Elisabeth Competition, the Paloma O'Shea, Vittorio Gui or the Juventus Festival.

Dan Iulian Druțac was born in Chișinău, the Republic of Moldova, in 1996. His father was a musician, so he encouraged him to become a violinist. His first steps into the musical world were taken at the 'Ciprian Porumbescu' High school, with the help of Professor Iulia Luță, and then Galina Buinovschi.

Shortly after, he started performing concerts in Moldova, Romania, Ukraine, Germany and Italy. He has won numerous competitions in Moldova, Romania, Ukraine, Belarus, Bulgaria, the Czech Republic, Armenia and the United Kingdom. In 2013, he won the first edition of the International Musical Competition of the Whitgift School. He received the Grand Prize, which gave him the opportunity to get a scholarship from the Whitgift School, a top school in Great Britain.

In 2013 he studied with David Takeno, one of the best violin professors in the UK. He also studied at the Junior Guildhall at the Guildhall School of Music & Drama. He has performed concerts in Great Britain, Moldova and Romania.

He plays on a 1696 Stradivarius violin.