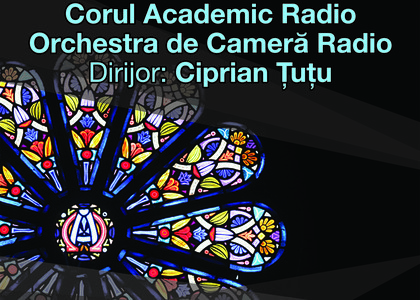 Religious concert with the Radio Academic Choir at the Radio Hall

Wednesday, March 14, from 19.00, the Radio Chamber Orchestra and the Radio Academic Choir, along with their guests, sopranos Cristina Radu and Antonela Bârnat, tenor Adrian Dumitru and bass Iustiniean Zetea invite the audience to a concert with religious works for choir, organ and orchestra, as they await the coming of the Easter holidays. The conductor will be Ciprian Țuțu, who is also the conductor of the Radio Academic Choir.

The first part of the program, Resurrection Day, will feature, among others, the Os justi by Anton Bruckner, the Crucifixus by Antonio Lotti, the Salve Regina by Octavian Nemescu, with Simona Săndulescu at the organ, but also Ziua Învierii (Resurrection Day) by Ioan D. Chirescu or the Moses. First Pesah - Gospel Fantasy, with soprano Olga Murariu and mezzosoprano Claudia Caia, accompanied at the piano by Dan Stoenescu. The second part of the program will feature the Missa in D minor no. 11, Nelsonmesse by Joseph Haydn, during which the audience will be able to hear the guest singers, sopranos Cristina Radu and Antonela Bârnat, tenor Adrian Dumitru and bass Iustinian Zetea, alongside the Radio Academic Choir and the Radio Chamber Orchestra.

The concert can be heard live on all Radio Romania Cultural and Music frequencies in the country and on live streaming at www.radioromaniacultural.ro and www.romania-muzical.ro.