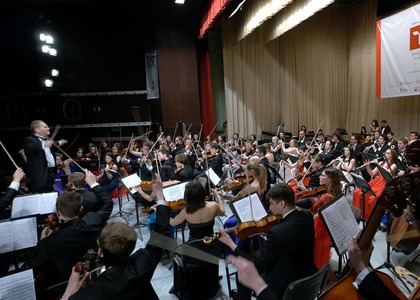 The concerts in Chișinău and Bălți performed by the Romanian Youth Orchestra conducted by Cristian Mandeal are the most emotional moments in the tour celebrating 10 years since the creation of the orchestra. The two events will take place on March 20, starting from 18:00, at the Organ Hall in Chișinău and on March 21, starting from 18:00, at the 'Vasile Alecsandri' National Theatre in Bălți. Both evenings are organized with the support of the 'Mihai Eminescu' Romanian Cultural Institute in Chișinău.

Marin Cazacu, general manager of the Romanian Youth National Centre, had this to say about the anniversary: "What's beautiful is that now, after 10 years, there are fulfilled, mature artists from the first generation that are coming to the events and are asking us to let them play alongside us in the 10 year anniversary concert. This makes me extremely happy."

The Romanian Youth Orchestra under the baton of Cristian Mandeal will perform the Rhapsody no. 2by George Enescu and the Symphony no. 2 by Rachmaninoff that will frame Saint-Saëns's spectular work, Introduction and Rondo Capriccioso op. 28 for violin and orchestra, with Dan Iulian Druțac as the soloist.

"I feel like the presence of the Romanian Youth Orchestra in the Republic of Moldova is more than legitimate in the context of the 10 year anniversary. We [Romanians and Moldavians] are part of the same family, the same geographical, historical and cultural space and we have the same needs and aspirations. On the other hand, in these 10 years I have worked with Moldavian musicians and I think that there are two sides to attracting young talented musicians coming here, one symbolical and the other concrete, as their presence brings more awareness and acknowledgement about ourselves, about who we were and who we continue to be. As always, art performed in a community is the most effective means of finding understanding between people", said Cristian Mandeal.