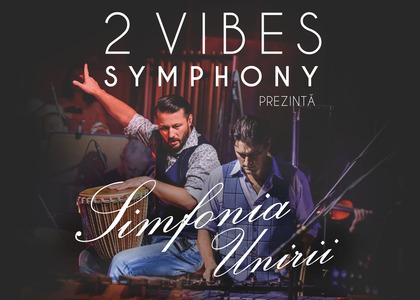 Unirii Symphony with 2 Vibes Symphony, the Radio Chamber Orchestra and the Academic Radio Choir, at the Radio Hall

"2 Vibes Symphony" is a unique project in Romania: this duo is formed by Ciprian Rogojan, graduate of the Gheorghe Dima Music Academy in Cluj-Napoca, founder of the band "Sistem", winner of the 3rd place in Eurovision 2005, and Alexandru Anastasiu, PhD in music, percussionist of the Yamaha scholarship and the organiser of the first International Vibrafon Festival, his name being on the famous Mike Balter musical batons.

Numerous guests will perform on the Radio Hall stage next to the 2 Vibes Symphony", the Radio Chamber Orchestra and the Academic Radio Choir. Exceptional guests, such as: the soprano Irina Baiant, and the instrumentalists Ioana Turcu who will play the flute and Horațiu Boșca playing the trumpet. The performance will be a mixture of symphonic, pop and contemporary music.

The soprano Irina Baianț gained Europe's sympathy with her talent and beauty. Her voice was heard on the world's great stages. Although she is only 25, she has an impressive track record and took part in over 60 national and international contests. She collaborated with Teatro alla Scala, Alte Oper Frankfurt, the Philharmonic in Berlin, the Vienna Opera House, the Garnier Opera House in Paris, Philharmonic in Bruxelles, The Bolshoi Theatre in Moscow, The Kremlin Palace, Grand Rex Paris, The National Opera in Instanbul, München Staatsoper, Her Majesty's Theatre and the Paladium Theatre in Great Britain.

Ioana Turcu graduated from National Music University in Bucharest, completed her studies in Switzerland, at Hochschule für Musik und Theater in Berna, where she gained her Masters diploma. In 2005 she was awarded magna cum laude for PhD in Music, at Granada University, Spain. She is the winner of numerous national and international awards (the International contest in Ridded, Switzerland and she was also awarded the Musician of the Year in 2003 in Switzerland). She was invited as a teacher at the "Eduardo Ocno" Artistry Lessons in Malaga, Spain. From 2015 she has been a flute teacher at "Icon Arts" Academy. At present she teaches flute at the National Music College "George Enescu" in Bucharest.

Horațiu Boşca graduated from "Gheorghe Dima" Music Academy in Cluj-Napoca, specializing in trumpet. After playing in the HBOrchestra next to Horia Brenciu for 10 years, he is now the founder of a project called Horacio del Bosque - trumpet, voice and entertainment.

The concert can be listened to live on all Radio Romania Cultural frequencies and Radio Romania Musical in the country and streaming live on the Internet at www.radioromaniacultural.ro and www.romania-muzical.ro.

The tickets and the subscriptions for the Orchestra's events as well as for the Radio Choirs' can be bought online at www.bilete.ro These can also be bought from Radio Hall's ticket office, and, are also available at the Romanian Post Offices where you can see the sign with bilete.ro, as well as inside Germanos and Inmedio shop, with the sign bilete.ro.

For further information regarding the Orchestras and the Radio Choirs please access our site www.orchestreradio.ro