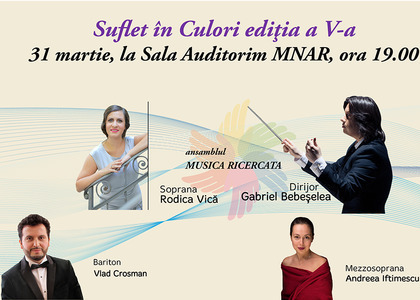 SUFLET ÎN CULORI - the fifth edition, a charity concert for the benefit of children with autism

On Saturday, March 31, 2018, at 7:00 p.m. on the stage of the Auditorium Hall of the National Museum of Art of Romania (Știrbei Vodă Str., nr. 1), The Music, Art and Culture Association and the Help Autism Association in collaboration with The Romanian Youth National Art Centre, bolstered by The European Union's Creative Europe Programme and with the support of Kaufland Romania, The Ministry of Culture and National Identity of Romania and The National Museum of Art of Romania and in partnership with The InfoEuropa Centre of the Ministry of Foregin Affairs, "Dimitrie Gusti" National Museum, George Enescu National Museum, Wagner Beautiful Arts and Stories, Floria.ro, organize the fifth edition of the "SUFLET ÎN CULORI" event, a charity concert for the benefit of children with autism.

This is the fifth year when the Help Autism Association represents the World Autism Awareness Day, April 2, through the cultural event meant to bring attention to the autism problem in Romania and concomitantly to raise funds for the support of the 500 children that the association takes care of.

This year concert will have a special atmosphere, taking place in the Auditorium Hall of The National Museum of Art of Romania and including internationally recognized artists: soprano Rodica Vică, who had been a part of this event ever since its first edition, Musica Ricercata ensemble conducted by conductor Gabriel Bebeșelea, mezzo-soprano Andreea Iftimescu and baritone Vlad Crosman.

We invite you to let the magical performance of some of the most talented Romanian artists envelop your souls and let us turn the music miracle into the children with autism recovering miracle, together.

The funds raised during this event will be directed to the therapy programs of the children with autism within the Help Autism Association. In order to participate you can access the website http://helpautism.galantom.ro/fundraising-pages/view?id=5434 to donate an hour of therapy for the special children.

The Musica Ricercata Ensemble is the project that the most valuable conductor of the young generation, Gabriel Bebeșelea (30 years old), launched in Romania on March 6, 2018, on the prestigious stage of the Romanian Athenaeum. A permanent orchestra which brings together: 19 Romanian instrumentalists - that live abroad - and 5 foreign instrumentalists, specialized in baroque music, that are owners of original preclassic period instruments. Gabriel Bebeșelea and the Musica Ricercata Ensemble occupy a distinct place on the Romanian musical stage, always pushing the creativity of the programs they interpret towards challenge, diversity, exploration and excellence.

Admired for his enthusiasm and musicality, conductor Gabriel Bebeșelea is known as being "one of the most talented Romanian conductors of the last decades" (George Enescu Festival Journal, September 7, 2011)

Gabriel Bebeșelea is the Main Conductor of "Transilvania" State Philharmonic in Cluj-Napoca and, apart of this, he also is to conduct orchestras like Royal Philharmonic Orchestra from London, Rundfunk-Sinfonieorchester Berlin, Konzerthausorchester Berlin, Ulster Orchestra Belfast, State Academic Symphony Orchestra of Russia "Evgeny Svetlanov", Rssian National Philharmonic Orchestra and Singapore Symphony Orchestra for this edition and the following ones. Some of the remarkable moments of the 2017/18 and 2018/19 editions are his debuts at Konzerthaus in Berlin, Musikverein in Vienna, Cadogan Hall in London, Royal Opera House Muscat and Palace of Arts in Budapest.

Rodica Vică is a soloist invited to many operas and philharmonics, both in Romania and abroad. The soprano debuted on the stage of the Bucharest Opera in 2010, when she was only 24 years old, later collaborating permanently with this institution, interpreting main roles in the following operas: The Magic Flute (Queen of the Night) and Don Giovanni (Donna Anna) by W. A. Mozart, Rita by G. Donizetti, Rosina from The Barber of Seville by G. Rossini, Alcina by G. Fr. Haendel, La Cenerentola by G. Rossini, L'elisir d'amore by G. Donizetti.

The artist is the winner of multiple prizes at both national and international competitions: First Prize at the International Baroque Music Competition, "La Stravaganza", in Cluj-Napoca, The Second Prize at the Radiodifuziunea Română Contest, "Drumul spre celebritate", the Prize for the Best Musical Interpretation for the "Ion Dacian" awards for Young Interpreters. In the 2012 fall, Rodica Vică was invited to participate at one of the most prestigious opera projects in Romania, Les Indes galantes by J.Ph. Rameau, directed by the famous Andrei Șerban, at the Romanian National Opera of Iași.

Andreea Iftimescu, born in Bucharest in 1985, graduated from the Canto section of The National University of Music Bucharest under the guidance of the dear departed Eleonora Enăchescu and teacher Maria Slătinaru-Nistor. But during her studies, she was remarked on different stages in Romania and abroad. Therefore, she was the soloist of opera Brundibar by Hans Crasa, in 2004, within the Voix Étouffée Festival in Paris. In 2009, Andreea Iftimescu obtained The Great Prize at Paul Constantinescu Canto Competition in Ploiești, and in 2010 she received The Special Prize at Salice d'oro Competition in Italy.

Vlad Crosman gratuated from Gheorghe Dima Music Academy in Cluj-Napoca at classic canto and opera directing sections. When he was still a student he debuted in roles like Fiorello from Il Barbiere di Siviglia by Rossini, Marullo from Rigoletto de Verdi or Papageno from Die Zauberflöte by Mozart on the two lyrical stages in Cluj. Between 2011 and 2014, Vlad Crosman was part of the Baroque Music Centre Ensemble in Versailles conducted by Olivier Schneebeli, ensemble which he participated in multiple opera productions with, productions that included baroque opera and sacred music. Among the most important musical projects this last year we can enumerate: his participation at opera Chimene de Sacchini along with Le Concert de la Loge, Grands Motets Concert by Lalande with ensembles Aedes and Le poeme harmonique, La sainte et la reine - a program with works by Purcell - with Le Concert Spirituel in Versailles and also the opera L'Europe Galante de Campra with ensemble La simphonie du Marais at Kontzerthaus in Vienna.

Worldwide, 1 in 68 children is diagnosed with Autism Spectrum Disorder, and the results of the studies conducted in our country show us the same statistics, unfortunately. Autism can't be cured, but with an early diagnostic and specialized intervention, almost half of the affected children can get to live an independent life. Without early therapy, the autism symptoms get worse as time passes. The method that has proven to be the most efficient one so far for the recovering of these children is The Cognitive Behavioral Therapy (CBT). Unfortunately, in order to have good results, the intervention takes a lot of time, a child with autism spends between two and eight hours per day in the therapy room, for months or even years. Because of this large number of hours that is necessary for each child, the costs are too big for the average wages of a family. Most of the parents that fight against the Autism Spectrum Disorder need support in order to afford this and offer their children the therapy that is meant to help them to achieve their purpose and to become integrated adults in the society.

For the last 8 years, Help Autism Association has been involved in the development of autism awareness programs, early diagnosis and early intervention for children with autism. Apart from the activity meant to change the autism status in Romania, the association offers therapy services in its 6 centres, 7 public-private partenerships - with Social Assistance Institutions and Child Protection in Bucharest, Suceava, Drobeta Turnu-Severin, Dâmbovița, Cluj-Napoca and at home, effectuates CBT therapy classes, free classes for the teaching staff, workshops and counseling meetings for parents and is coorganiser of the CBT International Conference - science that deals with autism recovering therapy.

The first edition of the charity concert "Suflet în Culori", which took place on April 3, 2014, represented the beginning of the rising awareness of the day of April 2 and included the participation of important Romanian artists: tenor Ştefan POP, soprano Rodica VICĂ, violin player Vlad MAISTOROVICI and piano player Ștefan DONIGA. The event was presented by actress Manuela HĂRĂBOR and journalist Marius CONSTANTINESCU, bringing together, at the Radio hall, lovers of classical music as well as people interested in changing the autism status in Romania.

The second edition of the charity event took place on the stage of the Radio Hall, on March 29, 2015, and reunited remarkable musician of both the national and the international stage. Violin player Remus AZOITEI and piano players Mara DOBRESCU and Diana IONESCU were the artists that chose to join the awareness campaign this time, bringing their talent and their celebrity status to help the cause.

Already a tradition for the musical genre lovers, the charity concert "Suflet în Culori", reached its third edition in 2016, bringing on the stage of the Romanian Athenaeum great artists, soprano Leontina VĂDUVA, who reached 30 years of career, musician Grigore LEȘE, organizer Nicolae LICAREȚ and French piano player Laure CAMBAU, the ones that brought color to the show which took place on April 2, World Autism Awareness Day.

The forth edition of the concert "Suflet în Culori" returned in the Radio Hall in Bucharest wih three international musicians from three countries, Romania, France and Spain, reunited through TRIO HUILLET, having been an excellent acoustic experience. Clara CERNAT (violin/viola), Thierry HUILLET (piano) și Gari CAYUELAS - KRASZNAI (clarinet), were the artists that joined the initiative of the two organisations to bring autism awareness to the attention of the Bucharest public through an exceptional concert.