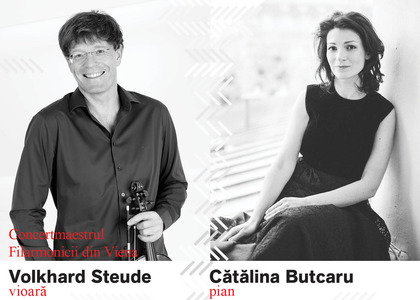 Music lovers rejoice this Easter Week because Volkhard Steude, the concertmaster for the Philharmonic of Vienna, and pianist Cătălina Butcaru will return to Bucharest and Timişoara with two recitals and once concert, all part of a more elaborate program, that will take place in a 5-year time frame, entitled Vienna Meets Romania.

Volkhard Steude, the same artist that delighted audiences as the concertmaster for the Philharmonic of Vienna in the famous New Year's concert, will be performing on an Antonius Stradivarius violin, that the National Bank of Austria has put at his disposal.

This year's program has in store an itinerary of sounds filled with melancholy, passion, mystery, fantasy, comprising sonatas by Beethoven, Schumann, Brahms and Chausson's Poème.

This would be Volkhard Steude's third performance in Romania, his previous experiences only fuelling the joy and excitement of his return:

"There are a plenty of beautiful memories that connect me to Romania. Performing in enchanted cities such as Sibiu, Timişoara or Bucharest always give you a special feeling. Cătălina Butcaru is a marvellous pianist, a delicate musical partner, full of inspiration. I am delighted to perform in Romania for the third time and we do hope that our music will make its way straight into the hearts of our listeners."

Also, the two musicians will also play the solo part in Mendelssohn's Concerto for piano, violin and strings, also known as The Double Concerto in D minor, on Friday, the 13th of April, at Radio Hall, as part of the concert held by the Radio National Orchestra, conducted by Cristian Lupeş.

"We are honoured to receive the invitation from Radio România to perform in Bucharest this year, along with the Radio National Orchestra, and interpret Mendelssohn's Double Concerto in D minor. The Double Concerto is an interesting chamber music experiment that puts an emphasis on solo parts, and it is truly a rare musical masterpiece that deserves the attention of the audience in Bucharest. It is a fresh and enthusiastic piece, at the same time having an extraordinary rhetorical confidence, especially since it was composed by Mendelssohn when he was only 14 years old.

This year's musical itinerary is part of the Vienna Meets Romania project, that facilitates the direct contact of members of the Banatul Philharmonic in Timişoara with members of the Philharmonic of Vienna, through workshops, collective work sessions and recitals. The project will take place until 2021, when Timişoara would become the European Capital, having BCR and the Austro-Romanian society in Vienna as its sponsors.

Volkhard Steude, a chamber music aficionado, is performing on a 1714 Stradivarius Violin (ex Smith-Querson), that the National Bank of Austria has put at his disposal. He has been the concertmaster of the Philharmonic of Vienna since 2000.

As a soloist, along with the Philharmonic of Vienna, he has performed under the baton of some of the most well-known conductors such as Giuseppe Sinopoli, Daniel Barenboim and Tugan Sokhiev. His European and Japan tours, as well as his impressive discography, help shape the career of a great musician, that will be enchanting the audiences of Romania as well.

Cătălina Butcaru, a pianist born in Constanţa, who now lives in Vienna, has been accepted into the Conservatory of Vienna when she was only 16 years old, where she would later on obtain the soloist diploma. In 2006, her solo debut in London was a success, an two years later, she premiered her solo CD, recorded at Wigmore Hall in London. The album, containing various works from Alban Berg, Maurice Ravel and Robert Schumann, has been well-received by the international critics and it has been broadcast in full by the Austrian Radio. Here is what renowned music critic D.C.F. Wright had to say about this album in his chronicle: "This is a must have disc. It is the best piano playing I have heard for many years..." Since the year 2000, Cătălina Butcaru has enriched her concerting experiences by performing in Austria, Italy, Great Britain, Germany, France, Spain, Luxembourg, Hungary, Holland, Turkey, Bulgaria and Romania.