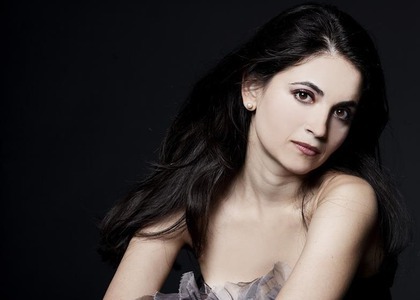 After performing on the biggest scenes of the world, soprano Teodora Gheorghiu is preparing for her first recital tournament in Romania that will take place between 16-29 March 2018 in six cities in the country and will end in Bucharest where the soprano will sing on the stage of the Romanian Athenaeum.

"I always return home with all my heart, I have great emotions, especially now that I will see in a very short time, an audience from several corners of the country ...", said soprano Teodora Gheorghiu. "The program I have prepared for my first recital tour in Romania includes areas and works from the Mozart, Rossini, Verdi, Bellini and Donizetti chamber music creations. It is a rich and harmonious program that I hope our audience will appreciate. "

The musical destiny of Teodora Gheorghiu was influenced directly by the great José Carreras, who remarked her at the Julian Gayarre International Singing Competition. After this contest, Carreras offered her a scholarship. Subsequently, she won several competitions, being awarded, among others, the "George Enescu" International Contest in Bucharest and the prestigious Queen Elizabeth Competition. The soprano also benefited from the scholarship "Herbert von Karajan".

In 2004 she debuted on the stage of the Vienna State Opera, and between 2007 and 2010 she constantly performed on this stage. She has been invited to the major European scenes such as the Théâtre de la Monnaie in Brussels, the Grand-Théâtre in Geneva, the Théâtre de Champs-Elysées in Paris, the Lorraine National Opera in Nancy, the Opera House in Lucerne, the Vienna State Opera. In 2014 she was invited to the Glyndebourne Festival in the role of Sophie (Der Rosenkavalier - R. Strauss). Teodora Gheorghiu has collaborated with renowned conductors such as Seiji Ozawa, Marco Armiliato, Franz Welser-Möst, Christophe Rousset, Adam Fisher and Bertrand de Billy.

Starting with 2015, Teodora Gheorghiu approached a repertoire of lyrical soprano and starred in roles such as Mimi (Boema - G. Puccini) and Madama Corteze (Il Viaggio a Reims - G. Rossini). With the role of Figaro's Wedding Countess by W.A. Mozart, she has made an ample tour in Japan.