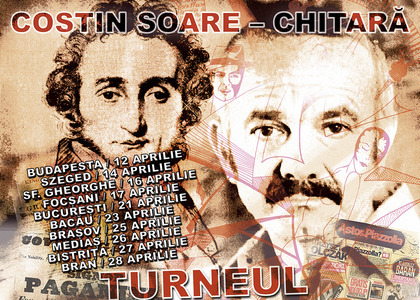 'From Paganini to Piazzolla' Tour

In Budapest, on Thursday, the 12th of April, begins the "From Paganini to Piazzolla" tour, with a concert organized by the Romanian Cultural Institute. (12th - 28th April). This project comes directly from the Kitharalogos Cultural Association, with Costin Soare as its protagonist. Being one of the most appreciated and active Romanian guitarists, with 5 international tours under his strap, the last two being successfully completed in 2017 ("From Bach to Beatles" and the "Twenty Shades of Music" CD promo tour, along with Bogdan Ştefănescu), this time, Costin Soare suggests a program that starts off with the music of Niccoló Paganini, the famous violinist who, as a lesser known fact, was also a very passionate guitarist, and the repertoire reaches in the realm of the one who reinvented the Tango in the 20th Century, Astor Piazzolla. Thus, embarked in a musical journey through the romanticism and neoromanticism era at the beginning of the 20th Century, the audience also has the opportunity of listening to the works of composers such as Francisco Tàrrega, Manuel de Falla, Isaac Albeniz, Heitor Villa-Lobos, shifting between virtuosity and delicacy, intense energy and intimacy. The 4th recital out of the total of 10 performances will be opened by a group of young aspiring instrumentalists, and one of the objectives of the association is promoting and supporting a young generation of guitarists. They will be receiving strings and other accessories for their instruments on behalf of Kitharalogos.

The Kitharalogos Association has prepared a tour that will visit 10 of the most important cities and tourist attractions of the country but also abroad destinations (The RCI subsidiaries in Budapest and Szeged, the Arcuş Cultural Center in Sf. Gheorghe, "Maior Gh. Pastia" Athenaeum in Focşani, the Auditorium Hall of Cervantes Institute in Bucharest, the "George Apostu" Cultural Center in Bacău, "Sergiu T. Chirilescu" Hall of the Transylvania University in Braşov, Schuller House in Mediaş, The Synagogue of Bistriţa, the Music Hall in Bran Castle). It is a journey designed to promote Romanian values, culture, as well as places rich in beauty, history and tradition.

Costin Soare (www.costinsoare.com) is one of the most appreciated and active Romanian guitarists, beautifully combining his musical career as a guitarist and a lutist, with his teaching career as a professor at "Dinu Lipatti" National Art College in Bucharest and associate professor at National University of Music in Bucharest. He is also the artistic director of "The Guitar Evenings" International Festival (www.seriledechitara.ro), a successful event that has reached its 7th edition, with famous guitarists from all around the world performing live. He has an experience of 5 tours under his strap ("From Bach to Beatles" in 2017, "Twenty Shades of Music" CD promo tour, along with flutist Ion Bogdan Ştefănescu in 2017, "Music in Romanian Castles" in 2016, "Paschal Harmonies" in 2015, along with actress Daniela Nane, and "Nocturne şi dansuri" in 2013), and of two CDs, one launched in 2017, "Twenty Shades of Music", with flutist Ion Bogdan Ştefănescu, and a solo album launched in 2014, "Nocturne şi dansuri". He is a permanent member of two chamber ensembles, along with flutist Ion Bogdan Ştefănescu and mezzo-soprano Claudia Codreanu, but, most important of all, Claudiu Soare is a tireless promoter of high quality classical music through an instrument with a widely appreciated intimate sound and repertoire. For his performances in 2016, the "Music in Romanian Castles" tour and the 4th edition of "The Evening Guitars" International Festival, Costin Soare was secured among the nominees for the "Classical Music" category at the "Matei Brâncoveanu" Award Gala organized by the Alexandrion Foundation.

Bucharest- 21st of April, 7 PM - Cervantes Institute (free admission, based on invites that can be obtained by contacting kithara.logos@gmail.com)

Braşov -25th of April, 7 PM - The Musical Center Hall of the Transylvania University in Braşov (admission by invites)