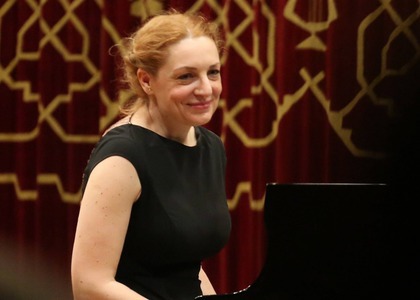 Tuesday, 17th of April, 7 PM, internationally-acclaimed pianist Mădălina Pașol will hold a new recital in the Grand Hall at the Romanian Athenaeum. The schedule will include works by Ludwig van Beethoven and Franz Liszt. The evening will end with the launch of a music album "Liszt-Schumann" which is a tribute to both composers (it includes Kreisleriana op. 16 by Schumann and Sonata in B minor by Liszt).

She graduated from "George Enescu" Music High School and in 1994 she went on to study at Berlin University of the Arts, Germany, in the class of prof. Georg Sava and then in the class of prof. Pascal Devoyon. Her artistic activity was rewarded with prizes, scholarships, and diplomas at national and international competitions: NaFög scholarship awarded by the German Cultural Senate, Paul Hindemith Foundation scholarship, Berlin University of the Arts scholarship, and a scholarship for post-graduate studies at the National University of Music Bucharest. She was one of the finalists at the Ferruccio Busoni International Piano Competition in Italy, at the ARD International Music Competition in München and she was awarded third prize at the Artur Schnabel Piano Competition.

In 2016, Mădălina Pașol collaborated with the National Bank of Romania at the Bucharest Music Film Festival - ARCUB, where she performed the Piano Concerto No. 1 by Tchaikovsky and she made her debut as a jazz pianist at the Jazz Festival Ferentari - First Edition. Moreover, on the occasion of Dinu Lipatti's birth centenary, the pianist performed a tribute-concert dedicated to the great musician at the Romanian Cultural Institute in Istanbul.

Piano Sonata in B minor