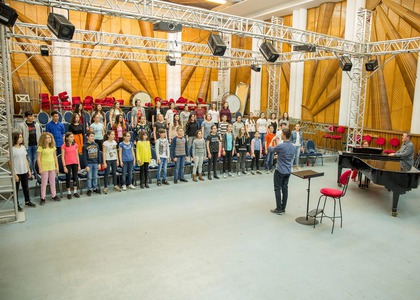 Radio Children's Choir in 'The Sound of... Musical', at Radio Hall

Saturday, 14th of April, 19 PM, Radio Hall will host the long-awaited spring concert with the Radio Children'sChoir, set up by conductor Voicu Popescu and assisted by Răzvan Rădos, in which the main theme is the musical repertoire adapted for a children's choir. Delia Nartea will present the performance while pianist Magdalena Faur will be playing the accompaniment. Stage movement by Mara Lăcătuş and Oana Necea.

The performance will be shot and broadcasted by Televiziunea Rom
ână. The concert The Sound of... Musical performed by the Radio Children's Choir was rescheduled, by popular demand, for 21th April, 7 PM, at Radio Hall given the fact that all the tickets for this event were sold out in a very short time.

It wasn't easy to decide upon only a few of the popular musical pieces which ranged from the classics such as Porgy and Bess (1935) by George Gershwin or The Sound of Music (1965) by Richard Rodger all the way to Veronica (1972) by Temistocle Popa or the more recent The Greatest Showman (2017) by Benj Pasek/Justin Paul. The Radio Children's Choir will sing the most important pieces which appeared in musicals such as West Side Story by Leonard Bernstein (1957), Mary Poppins (1964) by Richard M. & Robert B. Sherman, Buch Cassidy and Sundance Kid (1969) by Hal David, Burt Bacharach, The Phantom of the Opera (1986) by Andrew Lloyd Webber, Sister Act (1992) by Marc Shaiman/Traditional - Medley, Chicago (2002) by John Kander, Pich Perfect 2 (2015) by A.P. Carter, L. Gerstein, H. Tunstall-Behens.

Conductor Voicu Popescu said just before the performance: "As always, the Radio Children's Choir prepares a new project every Spring. In previous years we presented Romanian Roots, baroque and contemporary music - Ce Bucluc!, but this time, at the request of the choristers, I had to accept that the musical theatre has great potential, even for a children's choir. Thereby, I could see that musicals are about stories, music, dance, animation, play, education... Whether you're the protagonist or a spectator, musical theatre is equally tempting".

With dozens of participations at festivals, artistic tours, and international competitions all over Europe, Japan, SUA and Canada, the Radio Children's Choir, which will soon turn 75, received various awards and prizes. In 2004, European Coral Federation named the choir the Cultural Ambassador of the European Union.

Tickets and subscriptions for the events of the National Radio Orchestra and Academic Choir can be bought on-line at www.bilete.ro or at the Radio Hall box-office; they are also available at Romanian Post Office bearing the sign Bilete.ro and at Germanos and Immedio stores bearing the sing Bilete.ro.

Other information about the National Radio Orchestra and the Academic Choir at www.orchestreradio.ro.