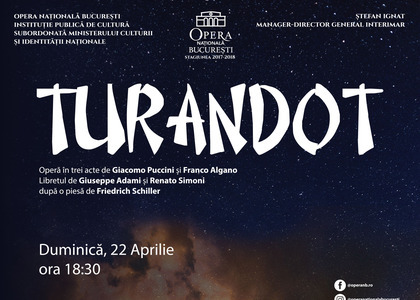 This Sunday, Turandot at the Romanian National Opera in Bucharest

Soprano Dragana Radakovic as Turandot and tenor Kamen Chanev as Calaf will be the special guests of the evening.

Turandot is an opera in three acts by Giacomo Puccini, with a libretto by Giuseppe Adami and Renato Simoni. It is based on a play by Friedrich Schiller, which in turn has its origins in a Persian fairytale included in Carlo Gozzi's 18th century anthology, 1001 Days. The score was left unfinished by Puccini and was later completed by Franco Alfano.

The world premiere of the opera took place on April 25, 1926 at the Teatro Alla Scala in Milan, under the baton of Arturo Toscanini. During the inaugural concert, the conductor stopped the performance at the exact moment in the score where Puccini had himself stopped. "Here, the Maestro put down his pen", Toscanini said. After a moment of silence in the hall, a shout was heard from the balcony - "Viva Puccini!" - followed by a public ovation.

Over time, Puccini's opera became famous worldwide for Nessun dorma, the famous final act aria performed by the most important tenors in history.

Tickets can be found at http://tickets.operanb.ro/ and at the ticket office of the Romanian National Opera House in Bucharest.