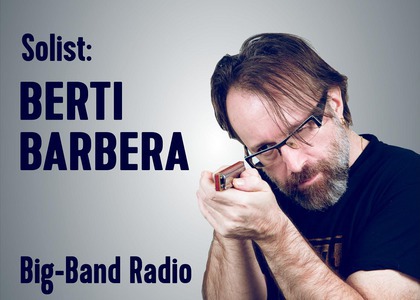 The Radio Big Band conducted by Ionel Tudor is preparing for an exceptional concert under the title Big Band Boom lead by Berti Barbera on Thursday, 19th of April, from 19.00 at Radio Hall.

When talking about the concert the soloist told us: "For me, the opportunity to have an environment where I can share with others what I received is an achievement, just as success means doing what you like. This story started when I was younger, and I thought that every object could become a musical instrument. Over time, I found out that this idea is common among people from all corners of the world and this allows them to communicate better. The possibility of using the advantages we have over other creatures, without inflicting any harm is what fascinates me about music. It's the capacity to communicate and express ourselves through various languages. Once more I have the chance of sharing with you the joy of performing a blues repertoire alongside an orchestra. This musical genre forms the roots of this great musical tree that we have now. We are different peoples, so there are many types of blues, and what I am sharing with you comes from a seemingly inexhaustible source. The joy is even greater as I rarely have the opportunity to perform before a knowledgeable public made up of people as passionate as me, who believe in the same values, with whom I can carry forward the music I believe in. This concert is my modest contribution to what we all might be".

The concert will be broadcasted live on all Radio România Cultural and Radio România Muzical radio frequencies from all over the country and on live streaming at www.radioromaniacultural.ro and www.romania-muzical.ro.

Tickets and subscriptions for the events of the Radio Orchestras and Choirs can be purchased online at www.bilete.ro or at the Radio Hall ticket office. They are also available at offices of the Romanian Post and at Germanos and Inmedio stores signalized through "Bilete.ro" stickers.

For more information on the Radio Orchestras and Choirs, visit www.orchestreradio.ro.