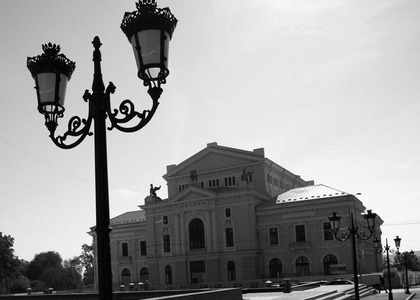 “Rhapsodies in Stone” at the 6th Edition of SoNoRo Conac Concerts

The SoNoRo Conac series of concerts - this year at their 6th edition - will start on the 26th of April at the "Teodor Costescu" Palace of Culture in Drobeta-Turnu Severin and will continue until September. It will offer music lovers the opportunity to discover wonderful mansions, castles and palaces in Romania and the Republic of Moldova.

This year's SoNoRo Conac edition is called "Rhapsodies in Stone" and is a tribute to the architectural diversity and complexity found over the territory of our country. During the tour through Romania, the "Rhapsodie Roumaine" CD will be also launched in honour of the Centenary of the Great Union. The CD features some of the best-known compositions by George Enescu and Béla Bartók and will be presented in a European tour that has started on the 27th of January 2018 at the Musikverein in Vienna. The "Rhapsodie Roumaine" tour will also include Amsterdam, Munich, Izmir, Antwerp, Arezzo, and Paris. In Romania, the CD will be presented in all of the SoNoRo Conac concert venues, where it can also be purchased.

The SOS Conac initiative started last year and aims to raise awareness of the buildings with architectural value in our country that are in an advanced state of degradation. The project will also continue this year with a concert at the Constanța Casino on the 9th of May. The concert will be a response to the #Ode2Joy Challenge started by Plácido Domingo, the President of Europa Nostra, in all of Europe - 2018 is the European Year of Cultural Heritage.

"We begin the new SoNoRo Conac edition full of enthusiasm. We have discovered some amazing places that we will reveal to our public during chamber music concerts. We want to emphasize their beauty and add more charm to the return through time that these wonderful mansions, palaces and castles offer. This year, our approach joins a European-wide initiative, one of celebration of the European Cultural Heritage. We are glad to be able to contribute to the integration of the Romanian cultural heritage into the European one" says Răzvan Popovici, initiator of SoNoRo Conac and director of the SoNoRo Music Chamber Festival.

"Rhapsodies in stone" SoNoRo Conac and the "Rhapsodie Roumaine" CD are supported by BRD - Groupe Société Générale, partner of SoNoRo Conac since the 2013 launch of the chamber music tour designed to bring classical music in places for which it was created.

"For the sixth consecutive year we invite the audience - new-comers and returning listeners alike -to discover, through music, the story of places, mansions and palaces that belong to a lesser-known heritage, but which can be valued or saved through cultural events. Thus, we continue our mission of getting involved in projects that complete our identity, anchoring us in the present while always thinking of the future, especially this year when - as a country - we celebrate the Centenary of the Great Union and - as Europeans - the European Year of the Cultural Heritage. The series of Sonoro Conac concerts is an invitation to discover/rediscover chamber music in a unique way, to become more interested in the historical places that we pass by and to cultivate in us the care for what is beautiful and authentic" says Emanuela Ghyka-Brand.

The first SoNoRo Conac concerts will take place this year according to the following schedule:

Târgu Mureș Palace of Culture, Mureș county, 16th of May

Mikes Castle in Zăbala, Covasna county, 17th of May

Mogoșoaia Palace, Bucharest, 19th of May

Sturdza Mansion from Popești, Iași county, 30th of May

Mimi Castle, Republic of Moldova, 31st of May

SOS Conac is a project developed in partnership with the Order of the Architects and the National Heritage Institute. Its purpose is that of mediating contexts favourable to the salvaging of important monuments of the Romanian patrimony.

Access to the SoNoRo Conac concerts is free of charge and is based on an invitation or reservation, within the limits of available places, at the following email address alexa.petre@sonoro.ro or phone number 0741.190.470.

For more information and the full schedule, go to www.conac.sonoro.ro.

In 2013 the Sonoro Association started a new project, SoNoRo Conac. By associating music with the emblematic Romanian architectural masterpieces, it suggests the need to respect, be aware and support the Romanian heritage and Romania's extraordinary cultural resources.

SoNoRo Conac started from the idea of giving music chamber its intimate original space, favourable to cultural dialogue and active listening by a small public. The project aims to raise public awareness towards the wide range of rehabilitated heritage buildings: fabulous, spectacular, and elegant buildings that need to be introduced back in the cultural circuit.

SoNoRo Conac is a project of the Sonoro Association, supported by the main partner BRD - Groupe Société Générale and the Order of the Architects of Romania.