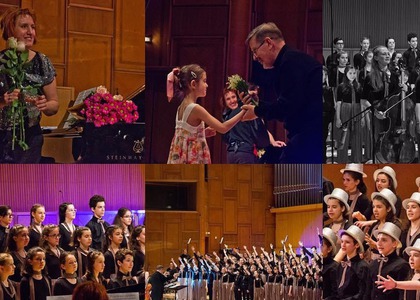 The Radio Children's Choir continues to impress through its professional and refreshing approach, but also by implementing state of the art IT technology in their methods of artist expression.

Want to feel the emotions the artists are going through when they're on stage? Want to see how it feels to attend a concert? Do you ever dream about singing with the best children's choir in Romania? Are you curious to see how a grown-up manages to have 72 children sound like one?

We invite you on stage alongside the Radio Children's Choir in their most recent show, The Sound of Musical. Don't worry, you'll be under the guidance of conductors Voicu Popescu and Răzvan Rădos and you'll be accompanied on the piano by Magdalena Faur. Your courage will be greatly rewarded by the generous applause from the audience.

For 5 weeks, every Friday afternoon, we will present some of the hits in musicals, performed by the Radio Children's Choir during the concert on April 21st and recorded in 360 , an interactive experience where you choose your part!

The Sound of Musical, a show which took place on April 21, was also the first full live Facebook transmission of a concert performed by the Radio Children's Choir. The classical music concert thus became an innovative cultural project accessible to a public that could not be present at the Radio Hall (https://www.facebook.com/permalink.php?story_fbid=10156082422355726&id=167986315725,https://youtu.be/8-4zu2UcTsw).

Having dozens of participations at festivals, artistic tours, and international contests in almost every country in Europe, in Japan, the USA and Canada, the Radio Children's Choir - fast approaching its 75th anniversary - has received many awards and prizes. In 2004, the European Union Choir Federation granted it the title of Cultural Ambassador of the European Union.

Besides the numerous a cappella concerts and the invitations to various events and festivals in the country, the Radio Children's Choir has in recent years performed in several festivals or vocal-symphonic happenings in Romania and abroad. Last year, the Radio Children's Choir performed alongside the London Philharmonic Orchestra and the Choir of the "George Enescu" Philharmonic during the Enescu Festival in Bucharest, while in London the Choir was on the stage of the Royal Festival Hall in George Enescu's Oedipus. In the same year, the children performed in Wagner's Parsifal at the Romanian Athenaeum. In 2016, the Radio Children's Choir was on the stage of the RadiRo Festival alongside the National Radio Orchestra and the Radio Academic Choir, in an extraordinary performance of Carl Orff's Carmina Burana at the Radio Hall.

Voicu Popescu is a graduate of the National University of Music in Bucharest. He started his career dedicated to the art of the choir as a member of the Madrigal National Chamber Choir led by Maestro Marin Constantin. Later, he collaborated with the ensemble as choir master, main conductor, and artistic director. Voicu Popescu came to the Radio Children's Choir in 1988, first as second conductor, alongside conductor Eugenia Văcărescu, then, in 2004, as main conductor. At the head of the choir, he has recorded some special performances for the Radio Record Library and took part in concert seasons with vocal-symphonic and a cappella programs.

His over 50 participations in artistic tours, festivals and international competitions have brought him the appreciation of critics and numerous awards and prizes. He is a member of the Olympic Choir Council, organizer of the World Choir Games and chairman of the National Office of the European Union Choir Federation. Voicu Popescu has also written articles in musical journals in Romania and abroad, was invited to hold workshops in Torino, Milazzo, Messina, Barcelona and Chișinău and was a member of national and international juries.

At only 28 years of age, young conductor Răzvan Rădos from Hunedoara founded and led various choirs in Romania, constantly collaborating with amateurs or professionals. He has received the Honorary Conductor Awards from the Vox Medicalis Choir and is Founding Conductor of the Royal Choir. He has joined the Radio Children's Choir two years ago as second conductor.

As a pianist, arranger and lyrical artists in the Academic Choir, Magdalena Faur has a rich musical activity. She has two degrees from the Music Academy in Bucharest - one in musical pedagogy (1994), the other in musicology (2001). As accompanying pianist, she has performed in chamber recitals with famous opera singers such as Roxana Briban, Mihaela Stanciu and Svetlana Sîcencova on the stage of the Romanian Athenaeum, the Radio Hall, the George Enescu Museum, as well as on other Romanian stages. Alongside the Radio Children's Choir - which she has accompanied since 2014 - she has performed in numerous concerts and recordings throughout Romania, as well as in tours in Germany and Greece.