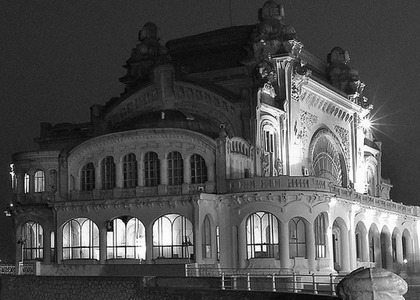 On Wednesday, 9th of May, the Constanța Casino will host a SoNoRo Conac concert, as a response to the invitation of Plácido Domingo, the President of Europa Nostra, with the occasion of celebration in 2018 of the European Year of Cultural Heritage. Placido Domingo wants to encourage the cultural actors across Europe so that they pay tribute on 9th of May to the European heritage through music, danse or any other artistic manifestation in the spirit of the Ode to Joy, composed by Ludwig van Beethoven. The artistic moments that will take place on this occasion, can be watched on social media by using the hashtag #Ode2JoyChallenge. More details here.

The concert organized at the Constanța Casino is part of the SOS Conac initiative, started last year, by which SoNoRo aims to raise awareness of the buildings with architectural value from our country that are in an advanced state of degradation. The concert joins Casino Rush, initiated by the ARCHÉ Association with the nomination of the Constanța Casino for the program 7 Most Endangered, developed by Europa Nostra. The inclusion in this program of the symbolic monument of Constanța represents the recognition of the particular importance of the Casino for the European heritage, but especially the opportunity of collaboration with international institutions with regard to the restauration works. Beside the international support, Casino Rush aims to ensure participatory preservation, which represent a quality reference for the field of the heritage's protection.

"We propose through the concert at the Constanța Casino a back in time in that early twentieth century, when the joy of living was reflected in the splendid Art Nouvou style in which the casino is constructed and in the music of composers like George Enescu, Frank Bridge or György Ligeti. During that times, the art echoed as an ode of joy in all its forms, but after that, difficult years of war, totalitarioan regime and distruction followed. The rehabilitation of the Constanța Casino would represent a bridge in time towards that moment of joy, that we want to return to and whose essence we want to show through our music, an appeal to saving the beauty of the world, which still remains in these moments,
rhapsodies in stone that we don't want to perish", says Răzvan Popovici, the initiator of SoNoRo Conac and the director of the SoNoRo Chamber Music Festival.

SOS Conac is a project initiated by the Sonoro Association and it is developed with the support of our main partner BRD - Groupe Société Générale and with the Order of the Architects and the National Heritage Institute. Its purpose is that of mediating contexts favorable to the salvaging of important monuments of the Romanian patrimony.

"Since from the beginning of the project I believed in the power of music to get out from the oblivion and to save buildings of great architectural value. The SoNoRo Conac Concert at the Constanța Casino will change for a couple of hours the atmosphere of a grieved beauty in what this place could turn again if it will be given back to the community and the cultural life of the city." says Emanuela Ghyka- Brand Communication Manager BRD Groupe Societe Generale.

The next SoNoRo Conac concerts will take place according to the following schedule:

Târgu Mureș Palace of Culture, Mureș county, 16th of May

Mikes Castle in Zăbala, Covasna county, 17th of May

Mogoșoaia Palace, Bucharest, 19th of May

Mimi Castle, Republic of Moldova, 31st of May

SoNoRo Conac is a project under the High Patronage of the Romanian Presidency.

Access to the SoNoRo Conac concerts is free of charge and is based on an invitation or reservation, within the limits of available places, at the following email address alexa.petre@sonoro.ro or phone number 0741.190.470.

After every concert, the audience is waited at the cocktail offered by Illy and Avincis vineyard.

For more information and the full schedule, go to www.conac.sonoro.ro.

In 2013 the Sonoro Association started a new project, SoNoRo Conac. By associating music with the Romanian emblematic architectural masterpieces, it suggests the need to respect, be aware and support the Romanian heritage and Romania's extraordinary cultural resources.

SoNoRo Conac started from the idea of giving music chamber its intimate original space, favourable to cultural dialogue and active listening by a small public. The project aims to raise public awareness towards the wide range of rehabilitated heritage buildings: fabulous, spectacular and elegant buildings that need to be introduced back in the cultural circuit.

SoNoRo Conac is a project of the Sonoro Association, supported by the main partner BRD - Groupe Société Générale and the Order of the Architects of Romania.