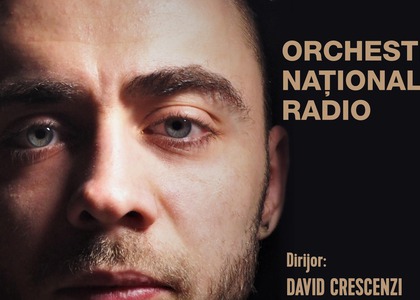 'An American in Paris, Rhapsody in Blue' (Fantasia, 2000) and 'The Sorcerer's Apprentice' (Fantasia, 1940) - scores from famous American films on the stage of the Radio Hall

Have you ever dreamed of dancing in Paris like Gene Kelly in the movie "An American in Paris" or losing yourself among the New York skyscrapers while listening to "Rhapsody in Blue", both composed by Gershwin? Or maybe you've been amused by the wizard's apprentice's tricks performed by the famous Mickey Mouse in Walt Disney's cartoon "Fantasia" (1940)? If any of these three suggestions are on your taste, hurry to get a seat at the concert scheduled on Friday, 18 May (19:00) at the Radio Hall.

Under the baton of the Italian conductor DAVID CRESCENZI, the National Radio Orchestra proposes a concert with a special program, built around three scores that marked the history of American cinema: the two compositions signed by George Gershwin - "An American in Paris" and " Rhapsody in Blue" and "The Sorcerer's Apprentice", under the signature of the French composer Paul Dukas.

The event is also unique thanks to the evening's special guest: the young pianist DANIEL PETRICĂ CIOBANU. At just 27 years old, the Romanian musician is already a laureate of several prestigious competitions, such as the "Arthur Rubinstein" International Piano Contest in Tel Aviv (Israel), one of the most demanding competitions where Daniel Ciobanu was awarded the second prize and the audience award. His debut concerts took place in prestigious halls such as Carnegie Hall in New York and Wigmore Hall in London, alongside tours in Japan, China, South Africa, and Taiwan. Present for the first time on the stage of the Radio Hall, the young pianist will perform two of the works from the evening repertoire: "Rhapsody in Blue" - Gershwin and Rhapsody on a theme of Paganini for piano and orchestra - Rachmaninov.

In 1951, MGM Studios released "An American in Paris" directed by Vincente Minnelli, with Gene Kelly and Leslie Caron, which was awarded the Oscar Prize for the best film, and which also included several pieces of Gershwin's compositions. A portrait of the French capital in the 20s of the last century, "An American in Paris" has a history at least unusual: Gershwin sketched the work in the capital of France, it was then orchestrated in Vienna, and the it was performed for the first time by the Philharmonic in New York (New York Philharmonic) in 1928, in the famous concert hall Carnegie Hall.

"Rhapsody in Blue" created by Gershwin is often considered a musical "portrait" of New York and was chosen as musical background for the animated film "Fantasia 2000", a sequel to Disney studios of the original "Fantasy" created by Disney in 1940. Gershwin testified to one of his biographers that the work is a kind of kaleidoscope of America, with all its diversity and madness of the big cities. A brilliant blend of jazz and classical music, "Rhapsody in Blue" was originally composed for the piano and big band jazz. The premiere took place in New York in February 1924, it became an immediate hit and was the first American composition to enter the international symphonic repertoire.

Based on Goethe's poem of the same name, 'The Sorcerer's Apprentice' became so well-known by being used by Walt Disney in the animated cartoon "Fantasia", made in 1940, where beloved Mickey Mouse plays the role of the apprentice, the recording being made under the baton of the acclaimed conductor Leopold Stokowski.

The concert can be listened live on all frequencies of Radio România Cultural and Radio România Muzical in the country and on live streaming on the Internet, at www.radioromaniacultural.ro and www.romania-muzical.ro. Tickets for the Radio Orchestras and Choirs concerts are available at www.bilete.ro, in the offices of the Romanian Post Office, in the Inmedio stores signalled through ``bilete.ro`` and at the Ticket Office of the Radio Hall.