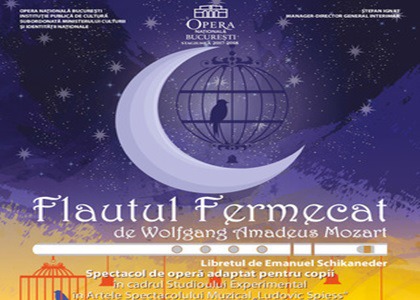 The Bucharest National Opera dedicates June 1st to the children

The Bucharest National Opera dedicates June 1st (Friday) to the children, and we are starting things off with an exceptional show in the foyer, at 11:00 - "The Magic Flute" by Wolfgang Amadeus Mozart, directed by Andrei Tatacaru, and from 17:00, on the main stage of the Bucharest National Opera, the ballet "Snow White and the Seven Dwarves" will be performed, with music by Cornel Trăilescu.

The people behind "The Magic Flute" by Wolfgang Amadeus Mozart - Anda Tabacaru, director, Smaranda Morgovan, music, Adriana Urmuzescu, set design - invite the young audience in a colorful and fascinating universe, with characters which they will certainly love. Mozart's enchanting music and the inspired tunes will accompany them through this wonderful story - Anatol Rogut on the piano, Nicoleta Amzulescu on the flute, Maria Paladi on the celesta. The participation of the National Opera Children's Choir will bring a new element in the show, as they will constantly be following the other characters in the opera (stage directions by Ileana Sora).

Mozart's masterpiece has been adapted for children, as the subject of the opera can be interpreted, due to its originality and charming music, as a fairytale that you can learn something from, where you can see clashes between truth and deceit, courage and cowardice, Dark and Light, friendship and betrayal.

The composer of the children's show "Snow White and the Seven Dwarves", Cornel Trăilescu, spoke to us about the adaptation for the Bucharest National Opera: "I think that musical education and the musical road start from childhood, but you have to give the child the pieces that the likes and understands. That involves a special, attractive language. How do you explain that fairytales, with their mythical world, are still so irresistibly attractive? Is it because the adventures and their heroes represent symbolic projections of some ancient human goals and ideals? At any rate, fairytales are alive, not only because children like to listen to them, but also because grown-ups like to tell them. They put a spell on us all the same, no matter the age."