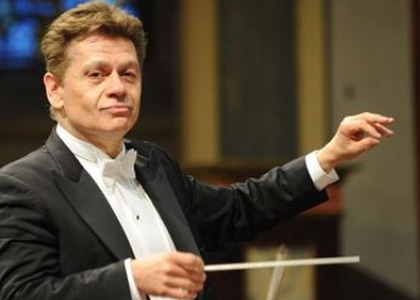 Conductor Christian Badea and the winner of the 2015 Tchaikovsky Competition, cellist Andrei Ioniță, return to the ‘George Enescu’ Philharmonic

The principal conductor of the 'George Enescu' Philharmonic, maestro Christian Badea, returns to Bucharest with an exceptional concert, programmed for June 7 and 8, 2018. The program features masterpieces by Tchaikovsky and Shostakovich. Soloist in the Cello Concerto No. 1 in E-flat major by Dmitri Shostakovich will be cellist Andrei Ioniță, winner of the 1st prize in the Tchaikovsky International Competition in 2015.

"I'm very glad to be able to offer the audience a concert full of favorites, in strong connection to one another. Pyotr Ilyich Tchaikovsky with the Romeo and Juliet Fantasy Overture and Francesca da Rimini, two works that are full of drama and emotion, and Dmitri Shostakovich - the Cello Concerto No. 1 in E-flat major, a masterpiece of great intensity. In between them, the soloist of the concerts, Romanian musician Andrei Ioniță, one of the most important cello players in the world, whom I was very glad to hear and invite to the first concert of the Romanian Foundation for Excellence in Music in 2012, when he'd just turned 18, and who earned his laurels in Moscow, where he won the Gold Medal at the Tchaikovsky Competition by ending the finals with a masterful interpretation of the Cello Concerto No. 1 in E-flat major by Shostakovich, which you will hear during these concerts. Andrei is an exceptional role model for the young generation of musicians in Romania", says conductor Christian Badea.

"It's a great pleasure to once again take the stage of the Romanian Athenaeum, this time for my second collaboration with the orchestra of the 'George Enescu' Philharmonic. This time, just like during my debut concert, I will once again be alongside maestro Christian Badea, to whom I am very grateful for the invitation and appreciation. I'm very glad to finally offer the Romanian public my absolute favorite work, that has brought me so many on-stage experiences, both in concerts and in competitions: the Cello Concerto No. 1 in E-flat major by Dmitri Shostakovich", says cellist Andrei Ioniță.

The symphonic orchestra of the 'George Enescu' Philharmonic

The Romeo and Juliet Fantasy Overture

The Cello Concerto No. 1 in E-flat major