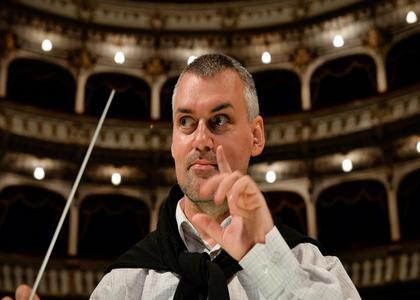 Composed for the 400 year anniversary of the printing press, the Symphony No. 2 – Lobgesang (Hymn of Praise) by Mendelssohn, at the Radio Hall!

Friday, June 8 (at 19.00), the Radio National Orchestra invites you to the Radio Hall for a concert built around the name of the famous German composer, Felix Mendelssohn, who is often considered to be a Mozart of Romanticism, through his various creations that have marked the 21st century.

Under the baton of József Horváth - conductor of the Hungarian Opera and of the Cluj-Napoca Romanian National Opera, whose repertoire includes over 40 operas and hundreds of symphonic works - you will hear a monumental work: the Symphony no. 2 Lobgesang (Hymn of Praise), dedicated to the divinity and based on texts from Luther's Bible. Composed for the 400 year anniversary of the printing press - invented by Gutenberg - the work, said to have been inspired by Beethoven's 9th, enjoyed a great success at its world premiere in Leipzig in 1840.

The conductor of the Radio Academic Choir, Ciprian Țuțu, has a very rich artistic activity: from opera to a cappella concerts, as well as vocal-symphonic concerts alongside important orchestras in the country (Brașov, Oradea, Cluj-Napoca, Bucharest) and abroad. Ciprian Țuțu is also the conductor of the Gheorghe Dima Choir in Brașov and choir maestro at the Brașov Opera House. In 2011, he became a member of the Anatoly vocal quintet, participating in concerts, festivals and competitions.

Soprano Diana Țugui is a soloist at the Romanian National Opera House in Cluj-Napoca. The artist took part in master classes given by great singers such as Viorica Cortez, Jaume Aragall, Teresa Berganza, Dalton Baldwin. Beyond her fascination with the opera and operetta repertoire, where she has already had the opportunity of entering the minds and parts of at least 20 leading characters, Diana Țugui is always willing to approach the lied repertoire or the most famous and difficult vocal-symphonic scores. Diana Țugui was praised in the symphonic work "Peer Gynt" alongside Florin Piersic (the Bucharest Art Festival) and in the musical "The Man of La Mancha", where the leading role was played by Tudor Gheorghe.

Cristina Grigoraș is currently a singer at the Romanian National Opera in Iași. Winner of the 3rd prize in the Vincenzo Bellini Competition (Italy, 2013), the soprano has collaborated with the Brașov Opera, the Craiova Opera, the Moldova Philharmonic in Iași, the Athenaeum in Iași etc. and went on tours with the Romanian National Opera and the Moldova Philharmonic - Iași in Germany, Austria, Switzerland, France and the Netherlands.

Tenor Pataki Adorján is a singer at the Hungarian Opera House in Cluj-Napoca and collaborates with all the philharmonics in the country. He currently is a permanent collaborator of the Budapest National Opera. At the same time, the artist is a guest at opera houses in Germany - Darmstadt, Chemnitz, Bonn, Aachen; in Norway - Bergen; in Italy - Como. His reprtoire includes both symponic and vocal-symphonic works and has sung important parts in operas such as Luisa Miller, La Traviata, Simon Boccanegra by G. Verdi, Madama Butterfly, La Bohème by G. Puccini, Székelyfonó by Z. Kodály.

The concert can be heard live on all Radio Romania and Radio Romania Music frequencies in the country and on live streaming on the internet at www.radioromaniacultural.ro and www.romania-muzical.ro.

Tickets for the Radio Orchestras and Choirs are available at www.bilete.ro, in the offices of the Romanian Post, in the Inmedio stores marked bilete.ro and at the Radio Hall ticket office.

For more information on the Radio Orchestras and Choirs, please go to www.orchestreradio.ro.