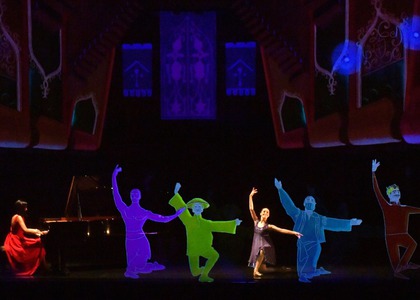 Pianist Alexandra Dariescu innovates the traditional concert format and attracts new audiences, who otherwise might have not attended a classic recital. The Nutcracker and I is a unique, modern show that combines music, dance and technology, thereby creating a unique and charming experience.

"The idea for the project came to me when a 9-year-old boy asked me what I'm imagining when I'm playing the music. I told him that I'm imagining all sorts of stories, but his question planted the seed from which the show sprouted. At the same time, I designed this project from the perspective of a personal responsibility, which is to make classical music more accessible to young generations", said Alexandra Dariescu.

What she did was to approach the best visual arts and dance experts, discuss with promoters from different countries in order to see how much success a show like this would have. The team initially produced a trailer that offered an overview of the show, because the show itself was offering a concept the world had never seen before. The entire process, from choosing the music, the scores, the choreography to transposing real characters in virtual characters - whose creation required over 35 000 hand-made drawings - to adapting the story - everything was under the supervision of Alexandra Dariescu for a period of three years.

The Nutcracker and I, by Alexandra Dariescu was launched in December 2017 in London at the Barbican's Milton Court Concert Hall, and tickets were sold out in just 10 hours. 35% of the audience was younger than 31, five times more than the average audience composition in the UK. The audience, children and adults alike, said they were delighted by the magic of the show and thought it was something truly new and remarkable.

The Nutcracker and Iwill be presented in Romania with the help of BRD Groupe Société Générale, in a tour taking place between November 19 and 26, 2018, in Iași, Cluj, Sibiu, Timișoara and Bucharest.

"Alexandra discovered a great recipe for attracting a young audience towards classical music because she came with a new perspective. The use of technology in cultural or educational projects exponentially increases the interest of the younger audience and has a far greater impact. We are happy to be able to support the staging in Romania - as an absolute premiere - an artistic vision that innovates the world of the classical show", said Flavia Popa, General Secretary of BRD Groupe Société Générale.

The project is rounded up by an audiobook featuring the story of the Nutcracker, adapted by Jessica Duchen and read by Lindsey Russell over the course of the 15 musical arrangements. Furthermore, it contains a booklet with stories and illustrations of the characters in the show.

Alexandra Dariescu integrated her own dream in this beloved story, where she sees herself re-imagined as Clara's character: from the girl who dreams to the girl who plays the piano during the concert. On stage will be a grand piano, played by Alexandra Dariescu, and a ballerina behind a canvas screen. On the screen are projected beautiful digital animations, drawn and created by Yeast Culture, that bring the story to life. The characters dance on the music, interacting with the pianist and the ballerina. The world's most beloved ballet music, that of Tchaikovsky, features works such as Dance of the Sugar Plum Fairy, Arabian Dance, Chinese Dance, Pas de Deux and the Flower Waltz in 15 virtuoso arrangements by Mikhail Pletnev, Stepan Esipoff, Percy Grainger and three new adaptations by Gavin Sutherland.

Performed and produced by: Alexandra Dariescu

On Thursday, May 31, Alexandra Dariescu was awarded the Order of the Crown of Romania in the rank of Officer by Her Majesty Margareta of Romania for her masterful skill in music, which is constantly acknowledged in Romania and abroad, where she has established herself as one of the most appreciated young pianists, with a rich and difficult repertoire. She has stood out through her generous presence during public activities of the Crown, where she performed at musical events, and has publicly supported the ideals and principles of the Crown.