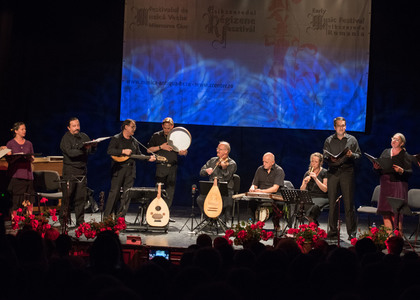 Back in Time with Spanish Early Music

It is impossible for music lovers not to be enchanted by the special sounds of the instruments used in Spanish early music, right from the first sound. The lute, the vihuela, the guitar, the harp, the viola da gamba are just some of the magic instruments that will remind of times long past at the Early Music Festival in Miercurea Ciuc, with passionate love affairs and unimaginable plots, the rustling of court dresses and the beauty of simple folk. Diverse and strong, sensitive and delicate, provocative and tempered, Spanish early music (the theme at this year’s Festival) is a complex music, combining elements from various cultures and musical styles, expressing a multitude of feelings that make you truly understand the meaning of the word “passion”. It is a word also featured in this edition’s motto (música apasionada) and best translates the effervescent spirit of the Spanish people, their rich culture and their varied music.

Charming stories.
The musical journey through medieval, Renaissance and Baroque Spain could not be done without the help of professional musicians, dedicated to studying early music, so be ready to be guided by some of the most respected artists of the genre!

The Barozda ensemble (which founded the Miercurea Ciuc Early Music Festival) will give sound, with the help of voices, the vielle, percussion, lute or oud, to real jewels of medieval music created in Spain: songs honoring the Virgin Mary from the collection “Cantigas de Santa Maria” (13th century) and “Llibre Vermell de Montserrat” (14th century), two of the most popular collections of songs. They will also call to life 10 songs from another important medieval manuscript, the “Llibre Vermell de Montserrat”, which dates from around 1399 and testifies to the existence of a cult worshipped by the faithful at that time: the cult of the Virgin Mary.

How did everyday life look like in the 14th century and what were the scenes that were most often related in the songs? You can learn this and more thanks to the project “Everyday life in the music of the 14th century”, made by Modo Antiquo (Italy). Songs about the everyday life of simple folk, with women going to the fountains, girls picking flowers, dogs barking and lambs bleating will remind you about steadfast and beautiful customs.

Diverse rhythms. A good reason to travel to ages long gone is the concert “Canciones” by Il Cigno (Germany), who will present you the musical preferences of nobles at the Spanish court in the second half of the 15th century, how the great musical styles influenced each other (influences dictated in part by political orientations and the situation of the wars fought at the time) or musical genres such as the French-Burgundian chansons of Guillaume Dufay, Johannes Ockeghem and Antoine Busnois, the Spanish villancico and the Sicilian strambotto.

The people from the Capella de Ministrers (Spain) will get you accustomed to the music of the 15th century, especially to songs that could be heard at the royal court of Aragon, French-Flemish and Italian dancing songs, melodies composed by important names such as Ausias March (who was, at that time, under the patronage of King Alfonso V of Aragon).

The Spanish Renaissance music, which had its golden age during the reign of King Ferdinand II of Aragon (1479-1516) and of Queen Isabella I of Castile (1451-1504), has stood the test of time, in great part thanks to chronicles and manuscripts, such as the “Cancionero de Palacio”, one of the most important sources of Spanish Renaissance vocal music, comprising several musical genres, mostly profane.

Through the concert “The Music of the Golden Century of Spain from the Cancionero de Palacio”, the Romanian ensemble Carmina Renascentia will recreate the thrilling atmosphere of these songs that are extremely varied in their themes (romantic, religious, festive, chivalrous, satirical, passionate, burlesque, political, historical). The polyphonic musical genres that stand out are the canción, the romance and the villancico.

With the musicians of the Trionfale (who will perform the concert “European and South-American Spanish music from the 17th and 18th century”) you will hear rhythms of European and South-American music from those ages, such as the tiento, the batalla, the passacaglia, the canario, the fandango, especially charming due to the wonderful voices and plucked instruments (the harp, the vihuela, the lute etc.) as well as bow string instruments (viola da gamba).

The French from Les Paladins will take you on a spiritual journey with the help of Spanish music and dance, from the 17th century towards the present.

Through a music and dance project called “Viva España”, they will tell you what the Reconquista meant for the history of Spain, how the Moors and the Jews influenced Spanish music or how thin the line between popular and fine art is. In their show you will discover rhythms of jácara, canario (marked with a beat on the table), folia, chaconne, zapateado and españoleta.

Drama. Baroque in music has been spectacularly represented in the countries of composers such as Johann Sebastian Bach, Georg Friedrich Händel, Antonio Vivaldi, Claudio Monteverdi or Henry Purcell; in Spain, at that time, only a few composers stood out (such as the ones of Italian origin, Domenico Scarlatti and Luigi Boccherini).

The Hungarian ensemble Capella Esterházy challenges you to an incursion into the music preceding the famous Scarlatti and Boccherini, into an impressive program („Las Amazonas de España – Spanish Amazons”), comprising works by Spanish composer Diego Ortiz (author, among others, of the first illustrated manual of string instruments) Italian composer and violinist Giacomo Facco, one of the most appreciated composers at the time.

A program with Baroque music could not be complete without the oratorio “St. Matthew Passions” by Johann Sebastian Bach, a monumental work and one of the most representative for the genre, which will receive new dimensions in the interpretation of the Festival’s Baroque Orchestra and the Festival’s Choir.

You will keep on enjoying the atmosphere of the Baroque alongside Angela Șindeli who, during the lecture „Baroque zarzuela – vocalism, drama and sensuality”, will tell you about the zarzuela, the lyrical-dramatic Spanish genre that alternates between spoken and sung scenes and that is filled with drama, humor, plot, bravura arias and characters from everyday life.