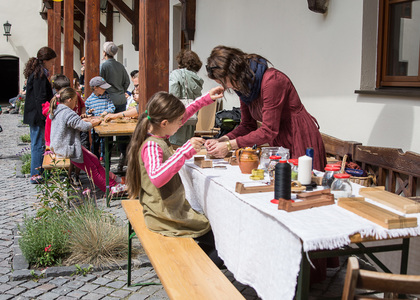 At the King’s Court

If you’ve ever been to the Corvin Castle in Hunedoara or to the Buda Castle in Budapest, you’ve certainly been awed by the imposing architecture that once housed the destinies of famous figures. You might have allowed yourselves to be transported, for a short time, to a past age of mysteries and beautiful ladies, of kings and knights, of dances and court muisc. You can feel it again at the Early Music Festival in Miercurea Ciuc, where you will hear the sounds of the music loved by the nobles of the time, such as the voivode John of Hunedoara and his son, Matthias Corvinus, king of Hungary (this year we celebrate 575 years since his birth and 560 years since his taking of the throne).

Duality.
The Musica Historica ensemble in Hungary will introduce you to songs from that age and the themes they are based on through an interesting program called “The Fruitful Apple – The Music of the Hunyadi Age (1440-1490)”.

Featuring several genres – from sacred Gothic and Czech music to humanistic odes, compositions of early Renaissance masters who worked in the Buda Castle, dances at noble courts, students’ songs –, the program brings us closer to a type of music that was very sought after at the time. Renaissance polyphony is probably the one most characteristic of the age, as it rose during a period when the last stages of late gothic music was also important.

This duality is observed by the musicians of the Musica Historica ensemble. Through their performances, they bring back diverse musical creations – among them, those that are based on ancient poems (such as the works of Janus Pannonius, performed, most likely, at festive events during that time).

“Epitaphium Ioannis Hunyadi, Matthiae regis patris” and “De electione Matthiae regis Hungariae” by Janus Pannonius are one of the most eloquent works in this sense, as well as the “More festi querimus” (Christmas song performed by Czech students who were collecting money), „Bolgár hősének Jankuláról” (a popular song in the area of the Pirin Mountains, Bulgaria) or the „Czaldy Waldy” (Czech dance melody).

The Codex early music ensemble and the Cygnini ensemble will introduce Renaissance dance and music from the French, Italian, Spanish, German and Hungarian repertoire during a story-concert featuring narrated passages.

Old customs. All these songs, as well as poems commemorating historical moments – such as King Matthias Corvinus’ victories, the captivity of the ambassador in Istanbul, moments from the life of John of Hunedoara – will come to you thanks to these exceptional musicians, who magnificently play the Renaissance lute, the kobza, the tambura, the fidula, the viola da gamba, the cromorne or the Renaissance flutes.

The atmosphere from the age of king Matthias Corvinus will be recreated through other artistic events as well, such as the “Children’s Renaissance Day”, where young and old are called to try activities and games characteristic for that age: the apple in a hole (picking up the apple from a hole with just your teeth), the wheel of fortune, stilts, bean spitting, hockey, the swineherd’s game, smashing eggs, cracking open nuts, eating fruit from a bucket.

The Pörgettyű Népi Játszóház Association will teach you to craft jewelry and toys from wool, pearls, copper, clay and leather with techniques such as weaving, spinning, stretching; the Talentum Foundation will reveal the craft of creating instruments (horns, drums), Renaissance accessories or Matthias Corvinus themed wooden toys. Arany Griff Rend will show you how to make Renaissance sweets.

You will be introduced to Renaissance instruments with the help of fairy-tales and you will discover details from King Matthias Corvinus’ court through drama games. Also during the Children’s Renaissance Day you will be able to enjoy authentic delicacies (40 types of craft beer, bio coffee, artisanal ice cream etc.).

And if you like harmony, good posture and early music, you can take part in Renaissance and Baroque dance lessons given by professor Anikó Szabó. The pleasant waving of the body, the pounding of feet as well as the graceful moves, the freshness and spontaneity characteristic of dances from those times will undoubtedly make you feel like attending a ball at a royal court.


Translated by George Arion, MTTLC, An I;
Proofread by Violeta Baroană
Return to archived Events