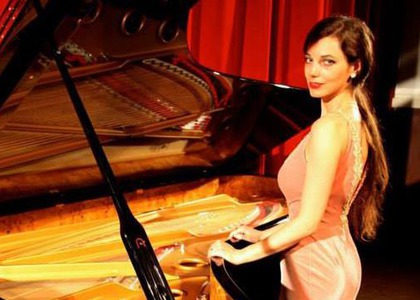 The Cultural Center "The Brâncoveneşti Palaces from the Gates of Bucharest" invites you to attend the Romanian pianist, Axia Marinescu's recital at Sala Scoarțelor on Sunday, October 28th, 2018, from 5 p.m.

Axia Marinescu is a laureate of several national and international music competitions. Opera Magazine, a Paris based publication, describes her as "a charismatic pianist whose light touch is diverse and colourful", but also as "an artist with the temperament of a true soloist" (Theodore Paraschivesco). The pianist began her career at the age of 11, alongside the National Radio Orchestra in Bucharest on the stage of the Romanian Athenaeum.

Residing in Paris since her studies, Axia Marinescu has performed recitals and concerts with orchestras all over Europe and Asia, and has been invited to perform at prestigious piano festivals: Piano en Valois, L'esprit du Piano, Piano Classica etc. Recently, Marinescu went on a tour of concerts and master classes in China as part of the legendary French festival Piano aux Jacobins. On this tour, the pianist became the face of the historical piano brand, Pleyel, in China.

In September 2018, Axia Marinescu released the album Introspections under Parisian record label Polymnie. The album includes works by Mozart, Brahms and Debussy. The disc received critical acclaim and was broadcast by the main French radio stations.

Her repertoire includes a wide range of musical works, from Rameau and Bach, to contemporary music, which she has performed on many occasions, including many debuting pieces. The pianist also performs chamber music with musicians like Leontina Vaduva, Viorica Cortez, the Enesco Quartet, Romain Zante, among others.

Her constant curiosity and openness to beauty led Axia Marinescu to the study of philosophy. The pianist has a degree in philosophy from the University of Paris and has published essays and articles in Romania, France and Germany in recent years.

Axa Marinescu is a TED speaker and is fluent in 5 foreign languages.

The Cultural Center "The Brâncoveanu Palaces from the Gates of Bucharest" Mogoşoaia is an institution subordinated to the City Hall of Bucharest.