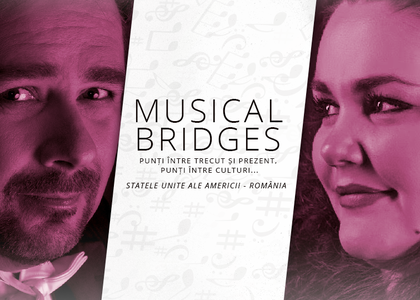 A special concert at Sala Radio, with songs performed for the first time, written by an American composer using Romanian lyrics by Mihai Eminescu

Article: Musical bridges, the concert that will bring the baritone David Small and the Romanian pianist Angela Drăghicescu in Bucharest. Tuesday, October 30th, at 19:00 o'clock: Musical bridges, a show that connects two cultures with a musical program comprised of the following: American musical pieces imbued with the musical tradition of our friends' across the ocean, an opus by George Enescu and, most importantly, a cycle of three songs composed by one of the most acclaimed American composers, Dan Welcher, to Romanian lyrics by Eminescu.

These three songs to Eminescu's lyrics will debut right in the presence of their American composer. "Ce Te Legeni, Codrule", "Când Însuși Glasul" and "La Steaua" are the poems chosen by Dan Welcher, a self-proclaimed fan of Eminescu's work, whose value he compares to that of the great classic English poems of the 19th century.

Along with this American gift dedicated to the Romanian centenary, the program will include the following: George Enescu's famous Seven Songs to the lyrics of Clement Marot, Op. 15, two songs by American composer Steven Mark Kohn, born in 1957, whose musical career is enviable, and a cycle of five lieder by composer Lee Holby (1926-2011), inspired by the style and philosophy of Franz Schubert. Angela Drăghicescu will also play a solo piece for piano by Dan Welcher.

Radio Romania Musical will record this event, which will be available to the public from the 1st of December.

The tickets to this show are available on www.bilete.ro, in the Romanian post offices, in Inmedio stores with the bilete.ro sign and at the ticket office of Sala Radio at 60-64 General Berthelot street.

Organizers: the Women Who Score Foundation and Radio Romania Muzical.

Partners: The University of Texas, Tecnoservice Equipment and the Brothers Golesti Insitute.

Baritone David Small enjoys an established and continuing career on the operatic and concert stage. His rich repertory includes more than 50 different opera roles. He made his debut in 1991 as Figaro in the well-known opera "the Barber of Seville" by Rossini at Kansas Opera House. He reprised his role for more than 100 shows.

He sang in Moines Metro Opera, Fresno, Nevada, Dayton, Toledo, Lyric Opera Cleveland and he toured in France and Spain with the Teatro Lirico d'Europa.

David Small also recorded the role of Tony in the opera Help, Help the Globolinks, the work of Gian Carlo Menotti for the Madison Opera and Newport Classics under the baton of John DeMain. You may also listen to him on the record he made with The Kona Coffee Cantata by Jerre Tenner, with the Prague Chamber Orchestra.

He performs many recitals, often serving as a soloist in concerts with American orchestras like the St. Louis Symphony, Cincinnati May Festival, Austin Symphony, Fort Wayne Philharmonic, Rochester Philharmonic, Canton Symphony, Missouri Symphony and the Bravo! Music festival from Colorado.

David Small also sang on the stage of the famous Carnegie Hall in New York, performing the Lord Nelson Mass by Jospeh Haydn and Mass No. 2 in G by Franz Schubert, under the baton of the famous British composer and conductor, John Rutter.

Considered by the international press to be "an elegant and spectacular pianist" (New York Times), demonstrating "supple and unique accompaniment skills" (Frettabladid, Iceland), the pianist Angela Drăghicescu has quickly gained an international reputation as one of the most important young pianists to come from Romania. Her recent concerts included recitals on prestigious stages all over the world, especially in the United States, where she has been living for 20 years. She also played at Carnegie Hall in New York, the Kennedy Center in Washington D.C., and Benaroya Hall with the Seattle Symphony, but also in Europe: Concertgebouw in Amsterdam, Salle Gaveau in Paris, Rudolfinum in Prague, Harpa in Iceland, and, of course, in Bucharest, with the George Enescu Philharmonic Orchestra.

Angela Drăghicescu frequents various chamber music festivals, among which are: Aspen Music Festival (USA), Verbiers (Switzerland), the Art Academy Interlochen (USA), SiPiano (Switzerland). From the vast literature of chamber music, she had recitals that included classic repertoire as well as modern and contemporary creations. Her first performance at Carnegie Hall (Weil Recital Hall) was full of works by contemporary composer William Bolcom, winner of a Pulitzer prize and two Grammys. She came back to Carnegie Hall in 2017 for the American premiere of Sonata for Violin and Piano by Dinu Lipatti.

She is a passionate educator, currently teaching piano and chamber music at the University of Puget Sound in Seattle, and she is the artistic director of Women Who Score, the first musical foundation in the U.S. dedicated to the promotion of music by female composers, in collaboration with the Seattle Symphony.

Angela Drăghicescu started her musical studies when she was 4 with Marieta Leonte. She graduated from the George Enescu Music High School in Bucharest, where she was taught by Cristina Georgescu. Among her other mentors: Ana Ulubeanu, Josette Hirsu and Roxana Gheorghiu. In 2001, she obtained a scholarship funded by the American government for piano studies at the LSU School of Music at the Louisiana State University, under the instruction of Michael Gurt. She got both her Bachelor's degree and her Masters there. In 2012 she finished her PhD in music, specializing in accompaniment and chamber music at the Texas University in Austin, where she was taught by Anne Epperson, pianist of the great violinist, Jascha Heifetz.

In 2012, Dan Welcher was awarded a prize for his music by the American Academy of Arts and Letters, describing it "as intense as it is elegant, Dan Welcher's music takes his listeners on a surprising yet inevitable path….Every work in his wide-ranging catalogue is written with the strongest musical signature".

Born in Rochester, New York, in 1948, he is one of the most played composers of his generation. He won numerous awards and prizes from institutions such as the American Academy of Arts and Letters, The Guggenheim Foundation, The National Endowment for the Arts, The Reader's Digest/Lila Wallace foundation, The Rockefeller Foundation, Meet the Composer, The MacDowell Colony, The Camargo Foundation, The Corporation at Yaddo, The Atlantic Center for the Arts, the American Music Center, and ASCAP. From 1990 to 1993, he served as the "composer in residence" for the Honolulu Symphony (under musical director Donald Johanos).

A much sought-after speaker who is known for making contemporary music intelligible to lay listeners, Welcher hosted a weekly radio program called "Knowing the Score" on the Austin based radio station KMFA from 1999 to 2009. This program won the ASCAP-Deems Taylor Award for Excellence in Classical Broadcasting. He now hosts the weekly program From the Butler School on KMFA.

In his capacity as a composition professor, Dan Welcher holds the Lee Hage Jamail Regents Professorship in Fine Arts at the Butler School of Music (The University of Texas at Austin), where he directs the New Music Ensemble.


Translated by Florea Gabriela, MTTLC an 1
Return to archived Events