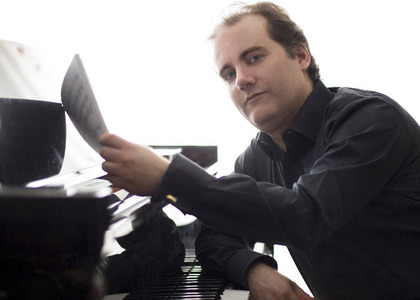 Wednesday, November 14th (at 7 p.m.), the Romanian audience will be able to listen to the performance of Spanish pianist JOSU DE SOLAUN, who won first place at the "George Enescu" International Competition in 2014, an extraordinary prize also won by legendary pianists such as Radu Lupu, Elisabeth Leonskaja and Dmitri Alexeev. The Radio Chamber Orchestra will perform at this event, conducted by CONSTANTIN GRIGORE, main conductor of the Royal Camerata Orchestra.

Josu de Solaun, the only Spanish pianist who won both the "George Enescu" International Competition and the fifteenth "José Iturbi" International Piano Competition, which took place in Prague, will perform Beethoven's Piano Concerto No. 3 in C minor at Sala Radio. Beethoven's concerto premiered in April 1803 with Beethoven himself as the soloist, the composition being inspired by Mozart's Piano Concerto No. 24.

During the second part of the event, Beethoven's Symphony No. 7 in A major will be performed. The symphony premiered in Vienna, on December 8th 1813, conducted by Beethoven at a charity event for the soldiers injured at the battle of Hanau (in which Napoleon's army also fought). The current concert will also include Romanian composer Dan Dediu's composition, Elegia minacciosa.

You can listen to the concerts live on all Radio România Cultural and Radio România Muzical frequencies and on www.radioromaniacultural.ro and www.romania-muzical.ro.

Tickets for Radio Orchestra and Choir concerts are available on www.bilete.ro, at any Romanian Post Office, in Inmedio shops with the bilete.ro sign and at the ticket office of Sala Radio.

For additional information on the Radio Orchestra and Choir please visit: www.orchestreradio.ro.