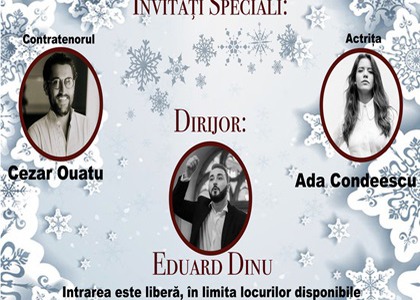 The Ascendis Chamber Choir, conducted by its founder, Eduard Dinu, will perform on the 20th of December 2018, from 7:30 p.m., in an amazing concert at St Joseph's Cathedral in Bucharest, located on the General H.M. Berthelot Street no. 19.

Having the famous countertenor Cezar Ouatu as a guest, the young musicians promise that they will enchant the public with music meant to bring one closer to the Christmas spirit.

"This will be the biggest event organized by the Ascendis Choir, since its foundation 7 months ago. I hope that our music will fill the hearts of the people in the audience with love and tranquility, make the holiday season more beautiful, and lead us to a favorable and prosperous new year." (conductor Eduard Dinu)

The MC of this event will be the amazing actress Ada Condeescu.

The Ascendis Choir or the Ascendis Chamber Choir is a chamber ensemble of young musicians between the ages of 18 and 35, all of them graduates of the National University of Music Bucharest.

Ascendis Choir was founded by its conductor Eduard Dinu, with the collaboration of his students and friends, members of his other ensembles.

The main purpose of the Ascendis Choir is to promote Romanian cultivated music, both by performing pieces by well-known composers, and by debuting contemporary musical pieces. The choir also performs a varied repertoire comprised of pieces from every period in music history and from all over the world.

In the first month of its existence, the Ascendis Choir performed in five concerts in China, on important stages in Beijing and Shanghai.

1) A tour organized with the support of the Romanian Cultural Institute in China - Beijing and Shanghai - 5 concerts during the 11th and the 22nd of March 2018.

2) A concert at a private event organized by the Artmark Galleries in Bucharest on the 14th of April 2018.

3) A concert at a private event organized by MedPublicis at the Palace of Parliament - on the 7th and the 8th of June 2018.

7) A vocal-symphonic concert, a performance of The Planets by Gustav Holst with the collaboration of the Paul Constantinescu Philharmonic from Ploiești - on June 28th, 2018.

8) A reportage made by producer and presenter Albertina Ionescu for the "Stilul tău" show on TVR - on July 2nd, 2018.

9) An event organized in collaboration with the Politehnica University of Bucharest at RomExpo - on July 7th, 2018.

10) A vocal-symphonic concert, a performance of The Planets by Gustav Holst with the collaboration of the London School Symphony Orchestra, at the Romanian Athenaeum - on August 2nd, 2018.

11) Participation at the 3Sound festival, first edition, at the Șuțu Palace - on the 14th of September 2018.

12) Gala concert with Gheorghe Zamfir, Valentina Naforniță, Enrico Marcias and their guests in Piața Constituției (Constitution Square) - on the 21st of September 2018.

13) An event organized in collaboration with the Politehnica University of Bucharest, inauguration of the new university auditorium - on the 23rd of September 2018.

14) Recordings at Electrecord of a piece written by the contemporary composer Matei Stratan for a film soundtrack.

15) Event organized by First 7 conference for Early Education at the Noblesse Palace - on the 1st of November 2018.

The Ascendis Choir has really managed to make a name for itself since it was founded. In their first month of activity alone they managed to surpass ensembles with ten more years of experience.

We are young, enthusiastic, and defined by our passion for music!