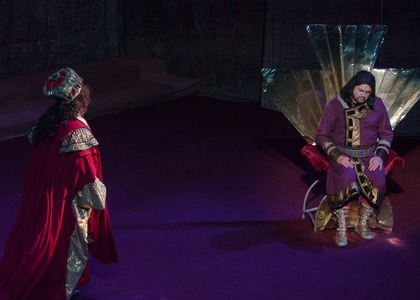 Alberto Veronesi, invited to take the conductor’s podium for ΄Nabucco΄, at the Bucharest National Opera

΄Nabucco΄ by Giuseppe Verdi is one of the longest-running creations in the history of the Bucharest National Opera. In this production, the late director Hero Lupescu, one of the most appreciated showrunners of Romanian lyrical theatre, accustomed to working with big choirs, succeeded in giving the Chorus a special touch, transforming it into a single character, just like its role used to be perceived in the theatre in ancient times. The Choir in this rendition,representing the voice of the enslaved people, moves in the same way, as one being, and has the same aspirations and feelings like any other single character. On the other hand, vocalists as the representatives of ideas conveyed in opera are, mostly, motionless, like an imposing statue, a reciting mask, or even a sentient machine. The scenography, created by George Doroşenco, even though made of decorative elements that are simple, yet great, expresses the main character's megalomania, the one of the frightening king Nebuchadnezzar.

The opera's premiere on the stage of the Bucharest National Opera in October, 1987, was a revolutionary act by the artists of that time, and it managed to transcend time, having been in the repertory for over 30 years.