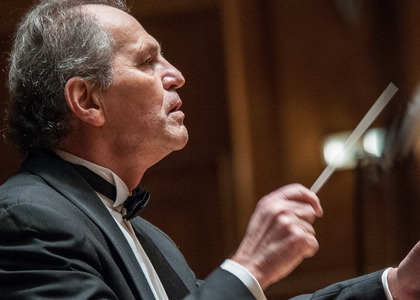 One of the greatest Romanian conductors, CRISTIAN MANDEAL - who has been in the business for over 45 years, conducting hundreds of concerts in 35 countries across four continents - and the young Romanian cellist ȘTEFAN CAZACU (25), playing a cello crafted 101 years ago in Torino (Italy) by the luthier George Ullman - meet on the stage of the Radio Hall, in an extraordinary concert, on Friday the 22nd of February (7 p.m.), along with the NATIONAL RADIO ORCHESTRA.

The exciting programme for the evening reunites four great composers: Schubert - Overture in the Italian Style, Tchaikovsky - Lensky's Aria from Eugene Onegin (in a new arrangement for cello and orchestra) and a nocturne for cello and orchestra, also by the same Russian composer; Dvořak - Rondo for Cello and Orchestra in G Minor; and Brahms - Symphony No. 1.

CRISTIAN MANDEAL has conducted over 60 musical premieres, some of them dedicated to himself. He is a tireless George Enescu enthusiast, promoting the national Romanian composer's music wherever he goes. For example, he was the first to conduct Enescu's opera, Oedipe, in Britain (Edinburgh Festival, 2002) and then Italy (Teatro Lirico di Cagliari, 2005).

As the main conductor and general manager of the 'George Enescu' Philharmonic Orchestra (1991-2009), Cristian Mandeal raised the level of this institution to incredible heights, effectively redefining the standards of quality in the world of classical music in Romania. He was the artistic director of the Haifa Symphony Orchestra in Israel (1999-2002) and of the Basque National Orchestra in San Sebastian (2001-2008); resident conductor of the 'Haydn Orchestra' in Bolzano e Trento (2000-2003); guest conductor of the 'Halle' Manchester Orchestra - the first to hold this title in the orchestra's 150-year long history; and conductor of the Copenhagen Philharmonic (2006-2013), and the Belgrade Philharmonic (2006-2007 season). Another point of interest in Mandeal's activity in recent years is his collaboration with the Romanian Youth Orchestra, which he has been grooming, educating and conducting since 2008.

Born in 1994, ŞTEFAN CAZACU started his musical education with his father, the well-known cellist Marin Cazacu. He received a bachelor's and master's degrees from the National University of Music Bucharest, where he studied alongside another significant cello player, Răzvan Suma. Thanks to the Erasmus grant offered by the European Union, he completed his studies at the University of Music in Vienna.

He has performed in Romania, the Netherlands, Israel, Austria, Hungary and Germany, collaborating as a soloist with all the Romanian symphony orchestras, but also with the National Philharmonic of Moldova in Chișinău, the Valencia Orchestra, Alicante Orchestra and others. Aside from Cristian Mandeal and Horia Andreescu, Ştefan Cazacu has also worked with conductors Cristian Măcelaru, Camil Marinescu and Theo Wolters.

The concert will be broadcast live on every frequency of Radio România Cultural and Radio România Muzical, and stream live on www.radioromaniacultural.ro and www.romania-muzical.ro.