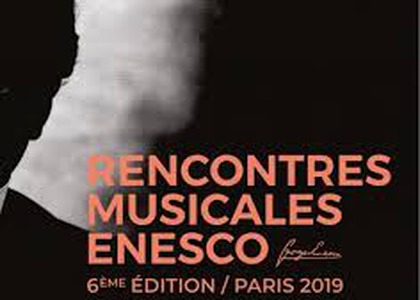 The 6th edition of "Rencontres Musicales Enesco" will take place between9th and 17thOctober 2019 on several Parisian stages and it is organized by the Noesis / Enescu Arts and Culture Association and the French Society of Music George Enescu, in partnership with the Romanian Cultural Institute in Paris, with the support of the Romanian Embassy in France and of the "George Enescu" National Museum in Bucharest.

This year, the event includes two extraordinary and unique concerts, in addition to the international canto competition, addressed to young professionals and vocal art amateurs. On 15th October, a rarely interpreted piece from the Enescian repertoire will be played( The Decet for winds, Op. 14) and, on 17 October, the jazz improvisation of the artist Teodora Enache (voice), along with Ramona Horvath (piano) will take place in Sala Bizantină of Palatul Béhague, the headquarters of the Romanian Embassy in Paris .

In oeder to promote the musical work of the Romanian composer George Enescu, as well as the creations of the new generations of Romanian and French composers, "Rencontres Musicales Enesco" brings 30 vocal talents prepared for the international career. In this regard, between 9th and 11th October, the "Concours International de Chant Georges Enesco" / "International Contest of Canto Georges Enesco" takes place. Its originality and novelty consists in creating two sections for the candidates: one welcoming amateurs and the other welcoming professionals. Moreover, this year, the public votes the finalist and the laureate.

The prizes for professionals are worth 8,500 euros. The "George Enescu" prize for the best interpretation of a piece by Enescu is worth 2,000 euros and it is granted by the Romanian Cultural Institute. The other big prizes are: the big prize "Opera", the big prize "Contemporary music" as well as the special prize "Jules Massenet" granted by the Massenet Society, the special prize "Cătălina Cortez, art agent", granted by Viorica Cortez, the special prize "Opera" offered by The National Opera of Cluj and the Public Award. The winner of the amateur category will benefit from a masterclass held by Viorica Cortez or Leontina Văduva in 2020 and will participate in a competition in France or Romania.

This year's final will benefit from the accompaniment of a symphony orchestra, conducted by Leonard Dumitriu.

The two unique concerts, which will be held on 15th and 17thOctober, will be accessible to the general public. The young instrumentalists from the National Conservatory of Music and Dance in Paris will perform The Decet for winds, Op. 14, under the direction of Marcian David. The Decet for winds, Op. 14 is a composition by George Enescu rarely performed on stage. The program of the event will also include: George Enescu - Cantabile and Presto for flute and piano, Henri Nafilyan - Celebration No. 3 for piano and The Decet for winds (first audition), Gyorgy Ligeti - Six Bagatelles for Wind Quintet and Thierry Escaich - Trois Instants fugitifs pour quintette à vente. The pianist Jean Dubé will participate in the concert.

On 17thOctober, on the stage of the Palais Béhague theater, two Romanian artists, the pianist Ramona Horvath - who just released her third album in Paris - and Teodora Enache, original voice with a unique stamp, will perform. The jazz soloist has recently achieved a great triumph at the George Enescu International Festival in Bucharest with her performance of vocal improvisation, starting from the creations of some classical composers, including the two Romanian Rhapsodies of George Enescu. The Paris concert will bring their guests, Nicolas Rageau (double bass, France), Bruno Ziarelli (percussion, France) on stage.

Between7th and 11th October, also at the headquarters of the Embassy of Romania in Paris, the cultural event proposes to the public visiting the exhibition "George Enescu in France", which discloses the years spent by the composer in France by rendering his creative and biographical itinerary with the help of a rich collection of photos and unique documents provided by the "George Enescu" National Museum in Bucharest.