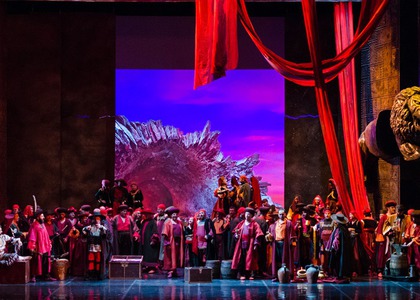 Bucharest National Opera House presents on Friday, the 18th of October, starting at 18:00, "the Troubadour" by Giuseppe Verdi, directed by Mario de Carlo. De Carlo has also designed the costumes and was responsible for the lighting and decors. Andreea Koch is the scenography assistant and Daniel Jinga prepared the Bucharest National Opera Choir. Alex Nagy is the assistant director. Maestro Iurie Florea will be the conductor.

The representation on Friday the 18th of October will bring to the public's attention three debuts on the stage of the Bucharest National Opera House. We are talking about soprano Simona Neagu in the role of Leonora, bass Iustinian Zetea in the role of Ferrando, and soprano Stanca Maria Manoleanu in the role of Ines.

Verdi's "The Troubadour" is one of his most intense, most dramatic and, paradoxically, one of the works most accessible to the public. Since its premiere in Rome, in 1853, the title has represented a great success and has been preserved ever since, in the seasons of all the great opera houses of the world, validating once again the value of the Italian composer's score, as well as the public's interest in this work.

A story that does not lack characters that exhibit strength in their ambitions, desires and passions, that confront eachother or give themselves with the madness of youth, of courage or of love. However, these destinies are studded with the pride and tools of vengeance, which further intensify their feelings and the flame of their existence. A captivating love story, born at the intersection of two worlds: the noble and the nomadic.

Verdi adopted from the historical subject that reflected the anti-feudal riots of the Spanish cities of the fifteenth century, focusing on the psychological drama of the main characters. Two brothers, Count de Luna and Manrico, the troubadour, who had been abducted Azucena when he was a baby, share a common love for Duchess Leonora. The two do not know the secret of their separation. Leonora loves the troubadour, but as they are surprised by the Count de Luna, the duel between the two is imminent. When Leonora receives the false report that Manrico was defeated in the duel, she determines to enter a convent. Her beloved troubadour, who had survived, seeks her at the monastery with the intention to run away. The army of the Count de Luna besieges the hiding place of the lovers, and old Azucena who wassearching for her son in the enemy camp, gets caught and sentenced to death. Trying to save his mother, Manrico is captured and thrown in jail. Desperate, Leonora promises the Count that she will marry him in exchange for Manrico's freedom. Di Luna happily accepts this proposition, little knowing that Leonora has taken poison to avoid having to spend her life with the Count, whom she does not love. Leonora dies in the arms of her beloved, proving her unlimited fidelity. Blinded with anger, the Count forces Azucena to witness Manrico's execution.The execution has scarcely taken place when the old gypsy announces that, in reality, he has killed his brother.