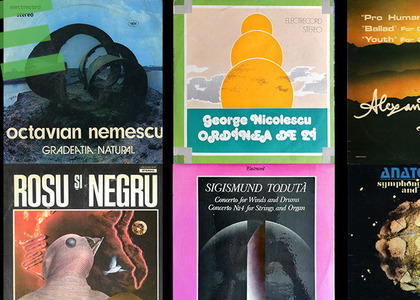 Romania in Vinyl Covers, in a visual-musical exhibition in Brussels

The exhibition "Electrecord - Romania in Vinyl Covers", dedicated to the largest and oldest audio recording company in Romania, Electrecord, will present its own history on Friday, October 25, 2019, at the Muntpunt Library, in Place de Monnaie no. 6, in Brussels.

The event will include the exhibition of disc covers accompanied by audio samples from various musical genres, with a focus on the original covers created in the latter part of the 20th century by visual artists such as Ion Bitzan, Ana Golici, Wanda Mihuleac, Marilena Preda-Sânc and Decebal Scriba . Also, video interviews of these artists, as well as the memories of the Electrecord director, Cornelia Andreescu, a true living history of the Romanian record company, and the anecdotal initiative of the composer Vasile Șirli, former artistic director, complete the exhibition in Brussels.

This visual-musical exhibition will be officially opened during the International Festival of Arts EUROPALIA Romania in the presence of curator Mihai Zgondoiu, in coordination with Horia Barna (ICR), artistic director of EUROPALIA Romania. At the opening, the musical collage part specific to the Electrecord sonorities will be exemplified by a DJ set by the artist Bogdan Orbita.

The public will be able to visit the exhibition from October 26 until November 20, 2019.

At the same time, the exterior windows at Muntpunt will become platform for the artist Dan Perjovschi to express himself, who will exhibit his famous drawings full of humor and subtlety about the current situation in Romania and Europe. The live performance "Perjovschi" will last one week, starting October 21, 2019, and the drawings will be admired until December 15, 2019. The exhibition "Electrecord - Romania in Vinyl Covers" is organized in partnership with Electrecord, under the coordination of the Romanian Cultural Institute.

"The Electrecord record company remains an emblematic national brand. We appreciated that the Belgian organizing partners of the Festival also supported the realization of a visual-musical and historical journey on the artistic evolution of Romania through Electrecord activity. Witnesses of many decades of evolution, but also of artistic involvement through censorship or obvious ideology, Electrecord's musicians and plastic artists, however, have often managed to synchronize Romania in this area with the European and world-class art. And this will be seen and listened to in the exhibition ", says Horia Barna, artistic director of Europalia Romania / ICR team.

He hopes that the presentation of this exhibition will reach Romania next year.

The curator of the exhibition, Mihai Zgondoiu, specifies that "Electrecord - Romania in Vinyl Covers" is a project of historical revision of the first six decades of operation in the Romanian space (1930-1990) of the oldest record house in Romania. "Imagined as a journey in the mirror, with graphic illustrations and video testimonies of the collaborating artists, as well as the artistic directors, the exhibition proposes new reflections, new lights and shadows on the freedom of expression in an age when the artists tried to pass the molds. ideologizing the communist regime, "says Mihai Zgondoiu.

"We want this project to reveal a social-political and cultural context through the eyes of the artists who created these album cover models during the era of communist censorship, an era when the phonographic industry offered its services to both the National Radio, the Society of Romanian Composers, festivals of light music (Cerbul de Aur-The Golden Stag), folk (Cenaclul Flacăra-The Flame Literary Circle), popular, as well as propaganda of the Communist Party ", explains Mihai Zgondoiu. However, from classical music, to pop, rock and jazz, to fairy tales, radio theater or foreign language lessons, the curator points out that Romanian artists have found some of the most innovative and visually resonant solutions to models of those times such as drawing, watercolor, collage, photomontage and photography.

At Muntpunt, visitors will be able to connect their phones to a QR Code in each section of the exhibition and will be able to listen to iconic pieces from the selected musical genres and illustrated by original covers. The exhibition will be accompanied by a website (www.imaginElectrecord.ro), and Mihai Zgondoiu and Horia Barna will organize special guided tours for visitors on October 26th in the afternoon.